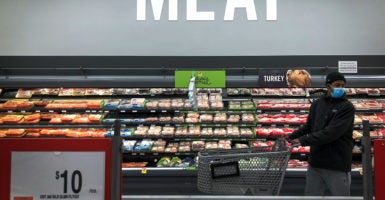 A shopper browses the meat section of a supermarket April 28 in Washington, D.C. Meat industry experts say that beef, chicken, and pork supplies could become scarce in the United States because many meat-processing plants have been temporarily closed due to the coronavirus pandemic. (Photo: Drew Angerer/Getty Images)

Warnings of the possibility of coming meat shortages have left many Americans wondering whether we will see the meat and poultry cases in grocery stores just as barren as the toilet paper shelves.

The coronavirus has led a number of large meat-processing plants, such as Tyson Foods Inc. and Smithfield Foods Inc., to close plants or cut back on the number of workers on production lines in order to keep employees safe and to follow Centers for Disease Control and Prevention social distancing guidelines.

“We are dealing with a very unprecedented situation, and it’s had an impact on the food supply,” Daren Bakst, a senior research fellow in agricultural policy at The Heritage Foundation, told The Daily Signal in a phone interview. “It’s important for people to know that the [Food and Drug Administration] still says there are no food shortages.”

Meat shortage concerns don’t hinge on the supply of animals, but rather on processing plants’ ability to slaughter the animals and safely process enough meat to meet consumer demand during the coronavirus pandemic.

John Tyson, chairman of the board of Tyson Foods, released an ad that ran in a number of newspapers and on Tyson’s blog page on April 26, raising concerns that “the food supply chain is breaking.”

Doug Baker, vice president of industry relations at the Food Industry Association, told The Daily Signal in a phone interview that he thinks the motivation for John Tyson’s warning “was to raise the awareness.”

Baker explained that some companies have been put in challenging positions because they are trying to follow safety guidelines laid out not only by the federal government, but also by state and local governments.

“You don’t know who exactly it is you are supposed to be listening to,” Baker said. “I believe that, personally, that letter was to get all of the government agencies on the same page as to what is it that is expected, because we have a public to feed, and we are doing everything we can.”

Tyson’s words succeeded in capturing the attention of political leaders. On April 28, President Donald Trump issued an executive order that will allow meat-processing plants to remain open during the pandemic under the Defense Production Act.

“The secretary of agriculture shall take all appropriate action under that section to ensure that meat and poultry processors continue operations consistent with the guidance for their operations jointly issued by the CDC and [the Occupational Safety and Health Administration],” the president stated in Tuesday’s executive order.

But it’s still likely that there will be meat shortages in spite of the president’s action, due to fewer workers being allowed in processing facilities in order to maintain proper social distance and employees quarantining at home due to infection from the virus.

“I think it remains to be seen if it’s going to have an impact,” Baker said of Trump’s order. “There are a lot of things that are happening inside the facilities, which is also going to negatively impact production. As you do pull people off the line, in order to create social distance and put those barriers up, production is going to drop.”

Coronavirus cases within meat-processing plants have reached more than 6,500, and 20 workers have died from the virus, according to a report from the United Food and Commercial Workers International Union.

“Within the processing facilities, many of those workers—not all, but a good portion—are coming from outside of the U.S., and they are brought in from other countries, as well as being domestic,” said Baker. “And if they are brought in from other countries, in some instances, they are living in group homes. And so, not only are they working in close, combined quarters inside the processing facility, they are also living in close quarters and socializing in close quarters.

Hiring new employees to fill the positions of those who are sick is not quite as simple as one might think, as noted by Bakst in a recent Daily Signal piece.

“The employees are not easily replaced, because there is a level of specialized knowledge required,” he wrote.

Sadly, processing plants’ inability to produce at normal levels is forcing farmers to have to euthanize animals.

“The animals grow at the speed that they grow at, and there are too many animals, and they have to kind of move them along,” said Bakst, adding:

That’s a problem. … The beef cows can kind of be walking around. They have more space. There is a little bit more flexibility. You can change the diet of the animals. You can slow down their growth.

So, there might be a little more flexibility on the farm-raised side of things for cattle, as opposed to maybe something as it relates to pork.

Another effect of meat-processing plants operating at lower capacity will likely be simpler cuts of meat in groceries stores. It takes more time, effort, and skill to produce boneless chicken breasts than it does to produce chicken drumsticks, for example.

“You will see fewer cuts of prime-type cuts, the more skilled cuts that are required, into easier ones. Taking primals and cutting them into strips and sirloins,” said Baker, adding:

You might even see what we call in the industry ‘hernia packs,’ which are the larger packs of beef, which you can then take home and cut into your own steaks and [roasts].

And so, for the purpose of continuing to get the inventory into the stores, you might see less variety.

It’s possible that with an increase in demand and limited supply, meat prices will be affected.

“Prices could go up,” said Baker. “They could go down. If you have an excess of cattle that are now grazing, then it becomes an inventory surplus. You could see proteins going down. And others, we could see prices increase.”

Baker acknowledged that “the industry is resilient, but strained.”

“But as a consumer,” he added, “if you walk into the store and can’t get the item that you want when you want it, that does not seem really resilient to you.”

In a recent study of 1,027 American adults, the Food Industry Association found that 76% of the participants said they have changed their eating habits during COVID-19, and 36% say they are eating healthier, while only 13% report eating less healthy than normal.

The study also found that concerns regarding access to food have lessened from 36% at the end of March to just 25% now.

It’s possible that current concerns surrounding meat shortages stem from what Americans experienced with toilet paper at the onset of the coronavirus pandemic. Rumors of shortages often lead to panic buying and stockpiling far beyond the normal rates of consumption.

“Sometimes, we are a self-fulfilling prophecy,” Baker said. “When we start talking about potential shortages, we actually create them.”

Bakst suggests that consumers can help prevent meat shortages by resisting the urge to stockpile and even by “looking to different sources of protein beyond beef, pork, and poultry.”