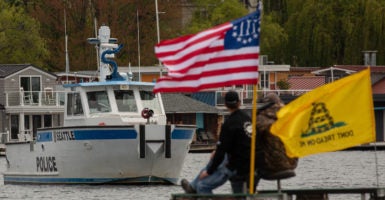 John Allison sees similarities between the response to the coronavirus pandemic and the financial crisis of 2008, when he was the CEO of BB&T Corp., a leading holding company.

“The financial crisis was brought about largely from government policies and regulation, and a number of large companies that took real economic risk,” Allison says in a phone interview with The Daily Signal. “This crisis is more intentional—arguably necessarily so—at the state and federal level. The economy was intentionally shut down to stop the spread of coronavirus.”

Allison, now an executive-in-residence at the Wake Forest University School of Business, is a member of The Heritage Foundation’s 17-member National Coronavirus Recovery Commission.

Made up of leaders with experience in government, medicine, business, and religion, the commission has proposed a five-phase plan and offered 47 specific recommendations for the first two phases, with more to come.

A guiding principle for the commission, with the mission of helping reopen the country gradually in the wake of the coronavirus pandemic, is that good public health policy is good economic policy.

Allison was the CEO of BB&T Corp. from 1989 to 2008, during which time it grew from $4.5 billion in assets to $152 billion in assets to become the 10th-largest financial services holding company in the U.S. Harvard Business Review named him to its list of the world’s top 100 most successful CEOs for the prior decade.

BB&T resisted taking money from the U.S. government’s $700 billion Troubled Assets Relief Program, known as the TARP bailout, because the financial institution was in better condition than larger competitors that quickly took the federal dollars.

However, federal regulators leaned on banks to take the money. Under Allison, BB&T didn’t spend its allocation and later paid it back. Allison became a vocal critic of TARP.

From 2012 to 2015, Allison was president and CEO of the Cato Institute, a Washington-based libertarian think tank. He is still on Cato’s board of directors and chairman of its executive advisory council, according to the organization’s website.

Today, Allison, 71, says that he is concerned that some will try to use the COVID-19 pandemic, a temporary problem, as an excuse to expand government permanently.

“This could be used as justification for the government to intervene in a lot of things that have nothing to do with the virus,” Allison says. “Government really expanded after the financial crisis with strings attached to the TARP money. Government uses a crisis, even manufactured crisis, to expand. We need less regulation, not more.”

In the run-up to the 2008 financial crisis, the federal government pushed “affordable housing” policies that encouraged irresponsible lending, Allison says, while the Federal Reserve could have foreseen the coming problem and didn’t act. Government agencies and the Federal Reserve both gained more power after the crisis, he says.

Similarly, Americans can fault the government for slowing a response to COVID-19, Allison says, citing the Food and Drug Administration.

“An example is that the FDA made it so expensive to make drugs,” he says. “Otherwise, we might have had a vaccine for this 10 years ago.”

The Centers for Disease Control and Prevention used a lengthy vetting process to develop coronavirus testing kits and didn’t approve nongovernmental tests until Feb. 29, when the agency began to fast-track emergency use authorizations for both public and private-sector labs. Before that, private-sector tests reportedly were kept out of the market and the CDC was the sole distributor of tests.

Instead of stay-at-home mandates issued by governors in most states, Allison says, he would have preferred a focus on protecting vulnerable populations, with a strong social distancing advisory, similar to the approach in Sweden, which has no lockdown order.

“It’s a government-driven reaction. You have to use common sense,” Allison says. “Some want to force a one-size-fits-all approach. … I’m very concerned about the gross violation of individual rights.”