Governors Need Some Skin in Game With Stay-at-Home Orders 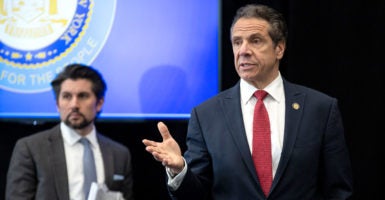 What if each governor who kept his state on prolonged lockdown after a decline in the health system surge bore the same burden as those who are unemployed? Pictured: New York Gov. Andrew Cuomo takes a final question Tuesday while leaving his daily coronavirus press briefing at SUNY Upstate Medical University in Syracuse, New York. At left is Jim Malatras, president of SUNY Empire State College. (Photo: Stefani Reynolds/Getty Images) 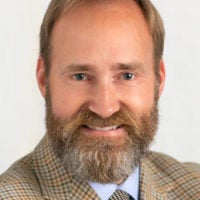 Jon L. Pritchett is president and CEO of the Mississippi Center for Public Policy, the state’s nonpartisan, free-market think tank. He previously was senior vice president of the John Locke Foundation and worked as an investment banker, executive, and entrepreneur. 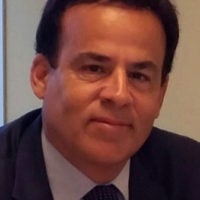 Ed Tiryakian, co-founder of Fandex, is in his 10th year as a visiting associate professor at Duke University, teaching corporate finance, business economics, and sports as a business.

As April nears a close, America’s small business sector focuses anxiously on May 1, the date arbitrarily selected by many governors to reopen their state economies.

Many small business employers and employees will mark it as the day they finally regain their livelihoods. For most of them, this day has been a long time coming.

The majority of the nation’s small business owners can’t keep their businesses shuttered for weeks or months on end, no matter how much the federal government tries to “stimulate” the economy. Yet many governors suddenly are backtracking on May 1, despite empirical data about the flattening of the coronavirus curve.

As is increasingly the case in this country, everything is viewed through a political lens. Clearly, COVID-19 and shelter-in-place policies are no exception.

Blue state governors such as Andrew Cuomo of New York, Philip Murphy of New Jersey, J.B. Pritzker of Illinois, and Ralph Northam of Virginia seem hell-bent on prolonging stay-at-home orders, seemingly rejecting a flattening of the curve more in favor of a parabolic outcome.

As unemployment claims skyrocket and Twitter fights and press conferences turn partisan, many governors and health officials seem to turn a deaf ear to the economic and personal crises of millions of Americans, all in the name of public health.

The drumbeat to reopen state economies is now manifested in weekly protests at state capitols, where thousands of American citizens openly defy stay-at-home orders in an attempt to sway the one autocratic decision-maker.

In states across the country, governors robustly have conducted an unprecedented usurpation of the American system of democracy—shutting down the economy, prohibiting a social and spiritual way of life, and rejecting any obligation to a transparent burden of proof—in an attempt to not “overwhelm our health care system.”

To be sure, there is no easy decision for a governor in weighing public health concerns versus economic ones.

In addition to the daily counts of confirmed COVID-19 cases and fatalities, we’re starting to count bankruptcies, abandoned mortgages, permanently closed businesses, and 26 million unemployment claims in a mere three weeks—all of which has contributed to the deteriorating mental health of millions of citizens.

However, despite the wish for a political magic bullet, there never will be a perfectly chosen date or “green light” indicating all is clear and we can announce it is safe to go back in the water.

No, leaders have to use discernment. They have to be willing to weigh the evidence from experts and then make a call. This is the time when leaders are separated from mere politicians.

Each governor must make an informed and politically agnostic decision as to what is best for his or her constituents. Partisanship and political prejudice must take a back seat.

When a governor is making such a decision, would it not be a comfort to know that this elected representative feels the pain of all the hardworking Americans thrown into unemployment for no other reason than an arbitrary state line?

As we say in the business world, governors would have some skin in the game.

So here’s an idea. What if each governor who kept his state on prolonged lockdown after a decline in the health system surge bore the same burden as those who are unemployed?

What if North Carolina Gov. Roy Cooper, for example, had to forgo his salary and benefits during the same period of his executive order to stay home? Would we not all feel that the goose and gander are on the same page?

Perhaps then, and only then, the economic weight of this crisis would be felt by the authoritarian types running states such as Michigan, Virginia, Illinois, New York, and New Jersey.

On the other hand, what does a political operative like Cuomo know about standing in line for hand sanitizer? What would Murphy know about how to apply with his bank for a Paycheck Protection Program loan? Can Pritzker really understand the personal circumstances of applying for unemployment?

Many of these governors are far too disconnected from the real impact felt by those who must suffer the consequences of government orders.

As the well-known economist Thomas Sowell has written: “It is hard to imagine a more stupid or more dangerous way of making decisions than by putting those decisions into the hands of people who pay no price for being wrong.”

We’re living in unprecedented times, as many of the governors like to say just before they further extend orders to keep our economies closed.

“We all have to sacrifice,” a state leader will say. Well, let’s try an unprecedented measure. Until the orders to limit making a living are lifted, let’s require governors and their cabinets to go without pay and benefits. Let’s ensure the governors and their staffs have some skin in the game.

That could be the incentive they need to leave the politics aside and let people have the personal responsibility and liberty to make prudent decisions for themselves.