Broadening US Ties With Greenland Is a Smart Move 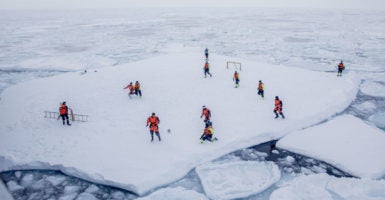 The crew of patrol vessel KV Svalbard and scientists from the Norwegian Institute of Marine Research play soccer on ice offshore March 22, 2018, in the sea around Greenland while two armed guards look out for polar bears. (Photo: Marius Vågenes Villanger/AFP/ Getty Images)

The recent announcement from the State Department that it would provide a $12.1 million aid package for Greenland is a welcome development.

It demonstrates that the United States is finally looking at the U.S.-Greenland relationship beyond only security issues.

According to State Department officials, “the aid will go to developing natural resources, energy technologies, education, and tourism, among other investments.” That will build on the existing security relationship the U.S. has with Greenland.

Greenland is an autonomous constituent country of the Kingdom of Denmark. Greenland was granted home rule in 1979 and self-government in 2009. It has competency over most policy areas, with the big exceptions being foreign affairs, defense, and monetary policy—all of which are still controlled by Denmark.

According to the State Department, the announcement of that $12.1 million in U.S. economic aid was made after close consultation with Denmark.

There’s a strong desire in Greenland for full independence, especially among Greenland’s political elite. Only one political party does not support independence—and that party holds just one seat in the 31-seat parliament.

Greenland is important to the United States for security reasons. The island acts as a forward operating base for the North American continent. Greenland is also part of the Arctic chain of defense (along with Iceland and the islands of Svalbard and Jan Mayen) that plays a key role in securing NATO’s northern flank.

The main U.S. military presence is at Thule Air Base in the north of Greenland. Thule also serves as a very important early-warning radar and satellite-tracking station for the protection of the U.S. homeland.

Even though Greenland is geographically in North America, most of its economic and cultural links are with Europe. Accordingly, the U.S. has been taking long overdue steps to take the relationship beyond the security dimension.

After years of the U.S. putting it on the back burner, the Trump administration announced last year that the U.S. will maintain a part-time diplomatic presence in Greenland. That’s something The Heritage Foundation has been calling for. While it’s a welcome first step, over time it should become an enduring and permanent presence.

An expanded U.S. diplomatic presence would demonstrate that the U.S. takes Greenland at a level of seriousness proportionate to its role in America’s security. It would also give the U.S. government a depth of situational awareness not possible without a consulate.

Greenland has surprisingly few economic links with North America, given its geographical proximity.

For instance, there are currently no direct flights from the U.S. to Greenland. The few direct flights that existed in the past were not profitable. The fishing industry accounts for 95% of Greenland’s exports, but only 1% of them go to the U.S.

Greenland is making a conscious effort to change this lack of connection with North America. Greenland’s national sea carrier, Royal Arctic Line, is planning to start a regular shipping service to Portland, Maine, later this year.

Although the project has been suffering from delays, Greenland’s government has been meeting with Maine government officials about increasing economic links.

The only way to fly commercially to Greenland is from Iceland or Denmark, but that could change in the coming years.

Greenland is set to begin construction on three new airports this year, to be finished in 2023 (in Qaqortoq in the south; in Nuuk, the capital; and Ilulissat in the north).

Greenland’s government hopes the new airports will allow direct flights from North America and open up new opportunities for business and tourism.

The U.S.-Greenland relationship is strong, but as with any other relationship, it has its challenges.

Greenland made news last summer when President Donald Trump suggested that the United States could buy the island. Obviously, that notion did not go down well with the people of Greenland. There are no official or serious efforts being made by the U.S. to purchase Greenland.

Speaking privately, however, Greenland officials welcomed the attention Trump gave to the country last year, since it placed it in the international limelight.

There are also some issues regarding the awarding of the base maintenance contract dealing with the day-to-day civilian operation of Thule Air Base and the shipping contract that deals with U.S. supplies going to the base. It’s in everyone’s interests that those matters are resolved quickly and satisfactorily.

As China and Russia get more active in the Arctic region, the U.S. needs to take a broader and more sophisticated  approach with its engagement in the region. But not everything can be about security all of the time. The U.S. should help deepen and foster economic relations in the Arctic region with the promotion of free trade and the principles of economic freedom.

The Trump administration’s decision to open a U.S. Consulate in Nuuk, along with the announcement of that $12.1 million in aid to foster economic growth, are steps in right direction.