Iran’s Naval Provocations Are Designed to Boost the Revolutionary Guards 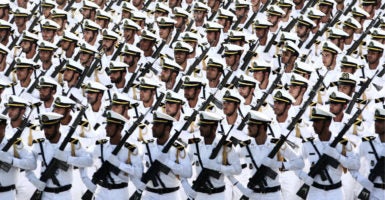 President Donald Trump warned Iran in a tweet on Wednesday: “I have instructed the United States Navy to shoot down and destroy any and all Iranian gunboats if they harass our ships at sea.” Pictured: Iranian naval troops march during the annual military parade marking the anniversary of Iran's war with Iraq in Tehran, on Sept. 22, 2014. (Photo: Behrouz Mehr/AFP/Getty Images)

Tensions in the Persian Gulf are rising again as a result of provocations mounted by Iran’s Revolutionary Guards.

President Donald Trump warned Iran in a tweet on Wednesday: “I have instructed the United States Navy to shoot down and destroy any and all Iranian gunboats if they harass our ships at sea.”

Trump later clarified that this was not a change in the military rules of engagement. Deputy Secretary of Defense David Norquist also told reporters that the Pentagon’s policy had not changed.

“The president issued an important warning to the Iranians,” Norquist said. “What he was emphasizing is all of our ships retain the right of self-defense.”

Trump’s warning came one week after an April 15 incident in which 11 Iranian fast boats belonging to the Islamic Revolutionary Guard Corps Navy “repeatedly conducted dangerous and harassing approaches” to U.S. Navy ships in international waters in the Persian Gulf, according to a U.S. Navy press release.

The Revolutionary Guards accused the Pentagon of giving a “Hollywood version of events” and claimed that the U.S. Navy had interfered with their own ships in early April.

Iran’s foreign minister, Javad Zarif, an expert in denial and obfuscation, gratuitously suggested that Trump should focus on saving the U.S. armed forces from the coronavirus.

On Guard Against the Revolutionary Guards

More worrisome than the naval provocations was the Wednesday launch of the Revolutionary Guards’ first military satellite, intended to celebrate the 41st anniversary of the founding of the Guards.

Launched from a secret missile base, the new satellite exposed as lies Iran’s previous claims that its space program served exclusively civilian purposes.

The timing of Trump’s Twitter warning likely was motivated more by the satellite launch earlier that day than by the naval incident that occurred the previous week.

The Trump administration, which withdrew from the flawed 2015 Iran nuclear agreement in May 2018, has systematically escalated sanctions on Iran’s hostile regime, particularly on the Revolutionary Guards.

In April 2019, Washington designated the Revolutionary Guards as a foreign terrorist organization and imposed sanctions against its leaders, front companies, and business interests.

As Iran escalated its nuclear blackmail and a shadow war to push back against Trump’s maximum-pressure sanctions strategy, the Revolutionary Guards played a leading role in Iran’s sabotage of four oil tankers last May and two more in June, and the shooting down of a U.S. Navy drone later that month.

The Revolutionary Guards also were the prime suspects in the Sept. 14 surprise attack on Saudi oil facilities by drones and cruise missiles. On Dec. 27, an Iraqi militia trained, armed, and coordinated by the elite Quds Force of the Revolutionary Guards rocketed an Iraqi base that hosted U.S. troops deployed to train Iraqi forces to fight ISIS, killing an American contractor.

The U.S. retaliated against the Kataib Hezbollah militia that launched the attack, which prompted that militia and other Iran-backed groups to stage a demonstration in front of the U.S. Embassy in Baghdad that they used for cover in a foiled effort to set the embassy on fire.

When the leader of the Quds Force, Gen. Qassem Suleimani, arrived in Baghdad to take charge of the situation, he was killed in a U.S. drone strike before he could orchestrate further attacks on U.S. interests.

After retaliating with a largely ineffective ballistic missile attack on two Iraqi bases that hosted U.S. troops, the Revolutionary Guards accidentally shot down a Ukrainian airliner on Jan. 8, killing 176 people—most of them Iranians.

Although the U.S. retaliated against Kataib Hezbollah once again, Trump reportedly declined to retaliate against Iran because of concern over the optics of launching reprisal attacks while Iranians were suffering one of the largest COVID-19 outbreaks outside of China.

Tehran repaid the favor with a propaganda campaign that asserted that the coronavirus pandemic was triggered by a U.S. bioweapon.

Guarding a Revolution, Not Public Health

The Revolutionary Guards not only have led Iran’s coronavirus propaganda efforts, but have sought to exploit the public health crisis to strengthen their own position within Iran’s political power structure.

Reviled by most Iranians for shooting down the Ukrainian airliner and lying about it for three days, as well as for propping up an unpopular regime through repression and intimidation, the Revolutionary Guards have sought to repair their appalling reputation through the militarization of Iran’s public health efforts.

They have taken command of Iran’s response to the pandemic, building hospitals, dispensing medicine, and enforcing quarantines. They have even invented “an astonishing scientific phenomenon”—a machine that they dubiously claim can detect the coronavirus anywhere within a 100-meter radius in as little as five seconds.

The rising naval tensions in the Persian Gulf give Iran’s rulers and the Revolutionary Guards an opportunity to rebuild their eroding popular support by instigating a confrontation with the United States.

That could enable them to rally nationalist support inside Iran at a time when the regime’s political legitimacy has sunk to an all-time low.

Such a contrived crisis would allow the Revolutionary Guards to pose as the protectors of Iran’s national interests, rather than just as the grim guardians of an Islamist revolution that represses Iranians.

By carefully calibrating a series of limited military clashes with the United States, Tehran’s rulers also hope to boost the prospects for “regime change” in Washington.

They think that they brought down President Jimmy Carter by taking hostages, and they seek to undermine political support for Trump by discrediting his maximum-pressure sanctions strategy.

It will be a long, tense summer in the Persian Gulf as Iran plots aggressive tactics for maximum impact on the November U.S. presidential election.