Keeping Our Distance in the New Normal of Coronavirus 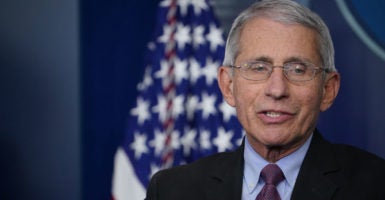 Dr. Anthony Fauci, director of the National Institute of Allergy and Infectious Diseases, recently told reporters that government officials can start to “think about a gradual reentry of some sort of normality” only after the number of the seriously ill sharply declines. Pictured: Fauci speaks Wednesday during the White House's daily briefing on the coronavirus pandemic. (Photo: Mandel Ngan/ AFP/Getty Images)

Public health officials advising governments here and abroad on the COVID-19 pandemic so far have offered shifting and tentative guidance on when and how to unwind the practice of social distancing.

Asked recently when the U.S. could return to normal, Dr. Anthony Fauci, the chief medical adviser to the Trump administration’s coronavirus task force, suggested that it couldn’t occur until the public is “completely protected.”

“If back to normal means acting like there was never a coronavirus problem,” Fauci told CNN on April 9, “I don’t think that’s going to happen until we do have a situation where you can completely protect the population.”

The standard of complete protection is at once noble and unattainable. Neither the U.S. nor any government ever has completely protected its citizens from contagion.

The Centers for Disease Control and Prevention reports that nearly 61 million Americans were infected in 2009, the last time a novel virus (in that case, H1N1) reached pandemic proportions.

This last figure is similar to the number of deaths that the University of Washington’s Institute for Health Metrics and Evaluation, or IHME, was projecting to occur by August from COVID-19.

That projection, operative as of April 23, is provisional. The IHME forecasts change frequently and fluctuate wildly, and other computer models have produced a wide range of predictions about COVID-19, the disease caused by the new coronavirus.

COVID-19 hospitalizations, according to the CDC, “are highest among older adults, and nearly 90% of persons hospitalized have one or more underlying medical conditions.”

That profile is similar to the seasonal flu, where 92.3% of those hospitalized had at least one comorbidity—that is, another chronic disease or condition. Age and comorbidities thus are important indicators of whether COVID-19 will cause illness serious enough to require hospitalization.

And yet, although most jurisdictions have closed schools, few have taken the steps necessary to protect the elderly, particularly those in nursing homes.

That is not to equate COVID-19 with the seasonal flu. It is caused by a novel coronavirus for which there is neither a cure nor a vaccine. Its transmissibility, lethality, and prevalence remain unknown.

The comparison does show, however, that perfection in the battle against infectious diseases is not a reasonable, or even attainable, goal.

Tragically, tens of thousands still die from the seasonal flu because it is impossible to completely protect the population—from influenza, COVID-19, or any other natural disaster. It would be foolish to ignore the measures that can protect us, but it also is unrealistic to think that we can protect everyone from getting sick.

Yet, that is the standard that Fauci, director of the National Institute of Allergy and Infectious Diseases, seemed to suggest must be met for the U.S. to return to normal. And this standard points to a problem with the policy of social distancing that goes beyond the economic carnage it is exacting in most highly developed countries: It’s never clear when it’s safe to return to normal.

The internal logic of social distancing dictates that, so long as those who are infected circulate in the community, everyone must treat everyone else as a carrier. And so long as there are carriers, returning to normal risks a “second wave” of contagion.

Social distancing, in other words, doesn’t end the pandemic. Individuals continue to get infected, absent an outside event such as a cure, a vaccine, or a seasonality that slows the spread of the virus once the weather heats up.

Thus it is nearly impossible to develop objective dates for ending social distancing.

Fauci recently told reporters that government officials can start to “think about a gradual reentry of some sort of normality, some rolling reentry,” only after the number of people who are seriously ill sharply declines. That is the approach taken in the Trump administration’s guidelines for “Opening Up America Again.”

Getting back to normal can begin now in some places. That is because the pandemic has not been evenly spread across the states or even within states.

Various regions of the country have very different case numbers and hospitalizations.

For instance, the New York City area, where more than 8 million live, has seen nearly 36,000  hospitalized with the virus (0.45%). In Louisiana, another hot spot, 2,000 have been hospitalized and more than half of the cases are in the New Orleans metropolitan area, home to 1.3 million.

In contrast, between Maryland and Virginia, a bit more than 3,000 COVID-19 patients have been hospitalized. Combined, these two states are home to 14.5 million, so the portion of seriously ill in this region because of COVID-19 is around 0.02%.

However the unwinding of social distancing proceeds, public health officials will face challenges. They have convinced the vast majority of Americans to sharply curtail social interactions to avoid getting sick.

Health officials now will have to convince Americans to return to “some sort of normality,” even though the infection continues to spread.

Officials will have to reassure us that because fewer are dying in May or June than in March or April, we can engage in activities that these same officials only recently pronounced unsafe.

That will be a challenge, rendered more formidable by the inherently open-ended nature of social distancing. But convincing Americans to return to work and play when a risk of contagion remains is much easier than aiming to “completely protect the population.”