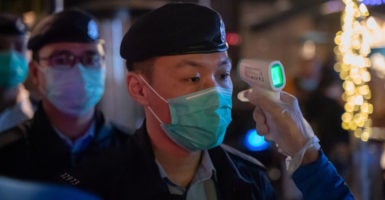 A police officer getting his body temperature measured by a bouncer as he enters a bar on March 29, 2020 in Hong Kong. (Photo: Anthony Kwan/Getty Images)

Pro-China authorities last week brazenly arrested Beijing’s chief critics in Hong Kong, a city that is supposed to have a high degree of autonomy. Unsurprisingly, that sparked further condemnation from the Trump administration at a time when the People’s Republic of China was already under pressure in Washington because of its role as the origin of the COVID-19 pandemic.

Why would China be courting further foreign denunciation? Perhaps it feels it has plenty of wiggle room.

China has silenced critics of its handling of the coronavirus crisis in the mainland itself, curbing potential downside at home, at least temporarily. In fact, its communist leaders seem to be benefiting from a rise of xenophobia and jingoism.

Here in the U.S., China is also profiting from the U.S. media’s rush to take China’s side in a battle with a Trump administration that many journalists clearly despise.

China long ago took steps to censor any criticism of its truculent behavior in American entertainment and the academy, so Chinese President Xi Jinping can rest easily on that score, too.

Just as mainstream media outlets such as CNN are now embarrassingly regurgitating press releases from China’s People’s Liberation Army and presenting the information as “news,” no movie will be made anytime soon that casts the Chinese government as the villain it often is.

That’s because no studio wants to risk losing China’s box office take, as I explained in this report five years ago. But despite Hollywood’s presentation of China as a country not very different from free democracies, the reality is far different.

As with each move that Hong Kong’s pro-Beijing leaders have taken in the past year, the arrest of Jimmy Lai, the last independent publisher in Hong Kong; Martin Lee, a venerable 81-year-old former parliamentarian and veteran of the pro-freedom movement; and Margaret Ng, also a former parliamentarian, and others, can only be described as unprecedented and worrisome. The charges were “unlawful assemblies.”

Lee and Ng were hosted by The Heritage Foundation almost a year ago, where Lee ominously said at a public event, “without the rule of law, nobody in Hong Kong can feel safe.”

Hong Kong, a wealthy free port created by the British in the 19th and 20th centuries, was ceded by London to Beijing in 1997 after the latter promised to maintain the city’s high degree of autonomy for 50 years afterward. But every recent step taken in the name of the Beijing-chosen chief executive, Carrie Lam, takes Hong Kong further and further down the path of no-return from rule by China’s Communist Party, which does not respect in the vast mainland the liberties it promised to respect in tiny Hong Kong.

That puts the Trump administration in an uncomfortable position. According to the Hong Kong Democracy Act, passed unanimously by both houses of Congress late last year, the administration must certify that Hong Kong indeed does have its promised autonomy if the city is to benefit from favored trade treatment not accorded to the rest of China.

The State Department last year did not decertify Hong Kong, but for the first time warned that the trajectory China had put the city on was worrisome. It is hard to see how the arrest of peaceful critics allows the State Department to certify it this year.

On the other hand, once it decertifies, the U.S. starts to run out of leverage quickly. The goal is not to embarrass China or hurt Hong Kong, a key global banking center that handles the majority of China’s initial public offerings, but to help the city’s residents retain what freedoms they still have.

Secretary of State Mike Pompeo was forthright in his censure of the arrests in an April 18 statement, referencing the international treaty in which China gave its word on Hong Kong’s freedom:

The United States condemns the arrest of pro-democracy advocates in Hong Kong. Beijing and its representatives in Hong Kong continue to take actions inconsistent with commitments made under the Sino-British Joint Declaration that include transparency, the rule of law, and guarantees that Hong Kong will continue to ‘enjoy a high degree of autonomy.’

Pompeo is expected to follow up on his condemnation Wednesday at the State Department. His boss, President Donald Trump, has given every indication that he is taking China’s behavior with respect to Hong Kong more seriously than has been his wont.

Beijing’s behavior regarding the coronavirus pandemic, which broke out a few months ago in the Chinese city of Wuhan, has only exacerbated matters.

Not only is the Chinese Communist Party under the gun for keeping information about the virus secret in the first key weeks of the outbreak in Wuhan, but the administration is now reportedly conducting a full-scale investigation into whether the virus actually escaped from a laboratory in that city.

The theory up to now has been that it came from live bats kept at a wet market there.

Xi’s reaction to the crisis has also come under criticism at home by courageous individuals. Ren Zhiqiang, a successful capitalist, wrote of Xi’s original denials and dithering in the early stages of the pandemic:

Standing there was not some Emperor showing us his new clothes, but a clown with no clothes on who is still determined to play Emperor.

He has been joined by professor Xu Zhangrun in alleging a cover-up. The problem, though, is that they both since have disappeared from public view and their voices have been silenced.

Communist propaganda gives a very different version. As the New York Times reported last week, Beijing portrays its reaction to the coronavirus as superior to that of the democracies. That has unleashed jingoism. In one of several examples, the newspaper wrote that a restaurant in northern China is displaying a banner celebrating the spread of the virus in the United States.

One can see, therefore, why the Chinese Communist Party might feel it has internal leeway to do what it wants in Hong Kong. Here in the U.S., the administration’s criticism of China eventually gets caught up in the maw of the campaign and the media’s obsession with all things Trump.

We got a taste of that on NBC’s “Meet the Press” on April 19, when host Chuck Todd asked Jeh Johnson, former  President Barack Obama’s Homeland Security chief, about the “unintended consequences” of criticizing China too much.

“The unintended consequence is that it makes it much more difficult to deal with a very large economic power on multiple fronts,” Johnson helpfully observed. “The president’s favorite tactic is to find somebody else to blame in a crisis like this.”

As China’s treatment of Hong Kong makes clear, there is a broad record of rogue behavior on the part of China.

Because we are an open society, China’s leaders well understand which buttons to push for a Pavlovian American press; namely, charges of racism and that Trump’s lack of multilateralism and crisis mismanagement have been the real problem.

The media should act responsibly and not fall for any of this.