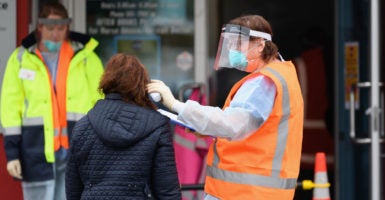 After completely reinventing its economy with free-market policies in the 1980s, New Zealand has enjoyed a remarkable run of prosperity as one of the most economically free countries in the world.

Over the past 25 years, the country has consistently ranked near the top of  The Heritage Foundation’s Index of Economic Freedom. It did it again in the recently released 2020 Index, ranking third out of 180 countries, as one of only six truly free economies in the world.

Ranking that high in Heritage’s Index is no easy feat. A country must average high scores in 12 categories of economic freedom covering policies pertaining to the rule of law, government size, regulatory efficiency, and open markets.

If New Zealand reduced that amount—admittedly, a tall task while dealing with the economic crisis spawned by the COVID-19 disaster raging—it might leapfrog over Singapore and Hong Kong as the freest economy in the world.

In stark contrast to their normal respect for economic freedom, New Zealand’s politicians have virtually locked down the island nation since late March in an attempt to totally eliminate the virus. That’s leaving many New Zealand businesses in a precarious situation.

The budget surpluses that have earned New Zealand one of the highest fiscal health scores in Heritage’s Index have made it easier for the government to hand out billions of dollars to subsidize wage earners and try to prevent truly massive unemployment while businesses remain shuttered and people are forced to stay home.

More than half of the New Zealand workforce now depends on government handouts.

A study by the Organization for Economic Cooperation and Development found that because New Zealand’s economy relies so much on tourism, it could be one of the hardest hit by the coronavirus among developed nations.

One measure that discourages tourism is the requirement now in effect that all people entering New Zealand must stay in quarantine for 14 days before being allowed to venture out. That’s longer than the average trip a tourist takes to New Zealand, which historically has been about 11 days.

Many businesses that are used to earning 100% of their revenues from tourists now have no revenues at all.

The government actions seem to have slowed the spread of the virus and have arguably limited coronavirus-related deaths to low levels, but other factors such as a geographically spread-out population and being surrounded by the ocean are relevant, too.

Neighboring Australia has not resorted to as heavy-handed an approach in fighting the virus, but has been similarly successful in limiting coronavirus cases and deaths.

In their zeal to eliminate coronavirus from their shores, New Zealand officials must not forget that economic depressions cause casualties as well, be they from alcoholism, suicide, desperation-induced crime sprees, or from chronic health conditions caused by the stress of living in poverty.

Reopening the economy as soon as possible may be as important a cure as any medical intervention.

At some point, ending the strict coronavirus mitigation measures that New Zealanders have endured since March will be necessary to avoid an all-out collapse of the economy there.

When that happens, New Zealand should not hesitate to reopen for business and continue to savor its status in the upper echelons of truly economically free countries.