Why COVID-19 Spitters Shouldn’t Be Prosecuted as Federal Terrorists 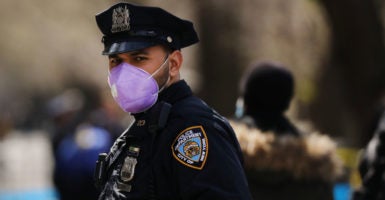 A police officer stands outside of Mount Sinai Hospital amid the coronavirus pandemic on April 1, 2020, in New York City. (Photo: Spencer Platt/Getty Images)

We’re in the middle of a crisis. People are on edge. Resources are limited. But through all of this, our first responders continue to do their jobs, day in and day out.

If someone attacks them, or spits on them, or threatens to harm them, they must be held accountable. Few, if any, would dispute that. We certainly don’t.

But, as we have previously written, law enforcement officers and prosecutors must resist the urge to charge most of these individuals federally, especially under federal anti-terrorism statutes.

Those statutes were never intended to deal with most of the situations currently being encountered by law enforcement, and state laws are better suited to handle them.

Since we last wrote on the subject, at least one Florida man has been charged under those federal anti-terrorism statutes after spitting on local police officers while telling them he was infected with the coronavirus. Thankfully, he wasn’t.

Nevertheless, federal prosecutors in Tampa, Florida, charged him with a biological weapons hoax under 18 USC § 1038 (a)(1). As charged, the offense carries a maximum of five years in federal prison.

Again, we’re not here to defend this individual’s despicable actions, or to play the role of his defense attorneys.

We’re here to highlight the problem with using anti-terrorism statutes to deal with this sort of conduct. In short, using these statutes to go after lone coughers is an unnecessary and unwise expansion of federal law enforcement power.

What are those other federal anti-terrorism statutes that officers would have needed to reasonably believe were being violated? In the Florida man’s case, federal prosecutors identified two.

The first outlaws possessing a “biological agent” for use as a weapon. The definition of biological agent is so broad that the coronavirus arguably meets it. But it’s far from a perfect fit.

The second outlaws the use of “weapons of mass destruction” that would affect interstate or foreign commerce.

Do federal prosecutors really want us to believe that spittle qualifies as a weapon of mass destruction?

True, as defined later in the statute, a weapon of mass destruction can be “any weapon that is designed or intended to cause death or serious bodily injury through the release, dissemination, or impact of toxic or poisonous chemicals, or their precursors,” or “any weapon involving a biological agent, toxin, or vector … .” But again, this is far from a perfect fit.

No, he attacked local law enforcement officers while they were responding to a local domestic violence call. Again, it’s shameful conduct all around, but the connection to interstate commerce, or any effect on it, is attenuated at best.

You might counter that this spitter is a really bad guy and deserves whatever the government can throw at him, even if the charges are a stretch.

That argument isn’t a good one, however, because larger balance-of-power issues are at stake.

The federal government is a government of limited and enumerated powers. In order for Congress to validly pass laws, there has to be some constitutional authority for its actions. Typically, Congress roots its authority in the Commerce Clause, as it did here.

Courts have said the Commerce Clause gives Congress a lot of authority, but it has limits. And in prosecuting someone under federal law, requiring prosecutors to show a connection to interstate commerce, if that’s the source of Congress’ authority, isn’t just a mere formality.

It stops the federal government from wielding power the Constitution denies it.

Where federal authorities have prosecuted HIV-related attacks, such as when HIV-positive federal inmates have bitten federal corrections officers, federal prosecutors didn’t charge these individuals as terrorists, even though their conduct was arguably more culpable since they were, in fact, HIV-positive.

Instead, they charged these individuals under federal assault statutes and sought appropriate sentencing enhancements based on their conduct.

To be clear, we’re no lovers of crime, and those who commit them must be held accountable by the proper authorities using the proper means. Extending federal power, albeit for the noble goal of holding those who hurt our law enforcement officers accountable, is misguided.

Federal power that is able to reach anyone’s conduct, however attenuated to federal interests, would be unlimited.

Do any of us really want that? Our Founding Fathers certainly did not.