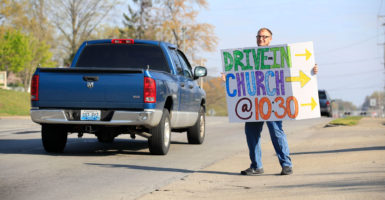 The Gospel of Mark recounts how the Pharisees tried to trick Jesus into expressing disloyalty to Caesar.  They asked him whether it was lawful to give tribute to Caesar.

In other words, we have duties to the state and duties to God. What happens when they conflict?  America was founded on the notion that they shouldn’t.

But just days before Easter Sunday, the mayor of Louisville, Kentucky, Greg Fischer, announced a citywide ban on religious services. His stunning prohibition included “drive-in” Sunday services in which congregants gather in their cars in church parking lots to worship and listen to sermons over car radios and outdoor speakers.

Instead of blessing the liquor store drive-thru while suppressing Sunday’s parking lot parishioners, our leaders should welcome prayer and faith.

The mayor even sought to enlist Louisville residents to report violations so that—like a scene from “The Godfather”—law enforcement could “record license plates of all vehicles in attendance.”

“In order to save lives, we must not gather in churches, drive-thru services, family gatherings, social gatherings this weekend,” Fischer announced just before Christians’ most sacred holy day.

Even though he restricted churches, the mayor allowed drive-thru service for restaurants, fast-food chains, and alcohol. Walmart, Home Depot, and countless other so-called essential stores—and their parking lots—remained open for business, so long as customers followed the prescribed social distancing guidelines.

Christians intending to celebrate Easter in the confined safety of their cars in church parking lots understandably were shocked and dismayed. The mayor’s order effectively forced would-be congregants to choose between obeying or worshiping together on Resurrection Sunday.

Walker’s order provided a full-throated defense of the First Amendment’s own restraining order, namely that “Congress shall make no law respecting an establishment of religion, or prohibiting the free exercise thereof.”

The judge’s recounting of America’s rich heritage reminds us of the vital role that religious freedom has played in our country.

He appreciated then-Supreme Court Justice Anthony Kennedy’s statement in the landmark 2014 case of Burwell v. Hobby Lobby: “Among the reasons the United States is so open, so tolerant, and so free is that no person may be restricted or demeaned by government in exercising his or her religion.”

Walker mentioned the importance of vigilance, citing several recent cases when the Supreme Court struck down government limits on the ability of the faithful to practice as they see fit. Walker lamented:

It was not long ago that the government told the Supreme Court it can prohibit a church from choosing its own minister; force religious business owners to buy pharmaceuticals they consider abortion-inducing; and conscript nuns to provide birth control. Even after the Supreme Court vacated lower court decisions . . . the Free Exercise Clause [of the Constitution] remains a too often-tested bulwark against discrimination toward people of faith, from religious cake-makers to religious preschoolers.

Walker, who has been nominated by President Donald Trump to a seat on the prestigious U.S. Court of Appeals for the District of Columbia Circuit, importantly reminds us of how much we still need clear-eyed, constitutional judges who remain committed to preserving fundamental rights and liberties even in times of national crisis.

As the judge explained: “The COVID-19 pandemic has upended every aspect of our lives: how we work, how we live, how we celebrate, and how we mourn. We worry about our loved ones and our nation. We have made tremendous sacrifices … ”

Walker is right. Now more than ever, America should welcome and encourage the religious community, not restrict it. There are things government can do, but there are many more things that faith can accomplish.

Instead of heavy-handed dictates, policymakers should seek voluntary compliance through education, information, and persuasion. Instead of imposing arbitrary and overbroad restrictions, governors, city councils, and mayors such as Fischer should understand that Americans must never be forced to choose government over God.

After all, as Walker wisely observed, “If beer is ‘essential,’ so is Easter.” Amen.