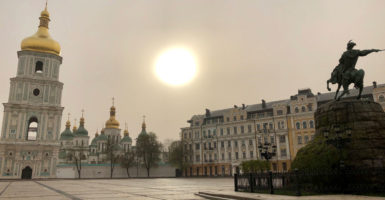 A dust storm and ash from nearby wildfires nearly blot out the sun Thursday in Kyiv, the capital of Ukraine. (Photo: Nolan Peterson/The Daily Signal)

KYIV, Ukraine—Seriously, what else could go wrong?

With Ukraine still on lockdown due to the coronavirus pandemic, massive wildfires, including one within the Chernobyl exclusion zone, sent clouds of potentially radioactive smog into Ukraine’s capital city of Kyiv on Thursday—the same day an unusual sand storm hit the city.

The combination of dust and smoke particulates nearly blotted out the sun. It still shone, but appeared as an oddly illuminated, orange disk, distorted by the polluted air to look larger than normal.

“Many today are wondering which one of the Egyptian plagues will come next,” the Ukrainian news site Euromaidan Press wrote on its Facebook page.

Haze shrouded Kyiv’s city skyline, limiting visibility on Thursday and Friday. The smell of burning was obvious and ever-present. The stone floor of the city’s central square, the Maidan, was slick from the accumulated dust.

After an afternoon walk around the city Thursday, this correspondent’s clothing was covered in a film of what appeared to be a fine orange power.

Kyiv had the dirtiest air in the world Thursday, according to the Air Quality and Pollution City Ranking, measured at 380. With a rating of 180, Shenyang, China, was the city with the next-dirtiest air on earth.

That kind of air pollution is disconcerting enough. Even more so when you realize it might be radioactive. Located about 60 miles north of Kyiv, the Chernobyl exclusion zone is the site of the world’s worst nuclear disaster, which occurred in 1986 while Ukraine was still a part of the Soviet Union.

On Friday, however, some Ukrainian officials downplayed concerns that Kyiv’s unusually polluted air was the result of wildfires within the Chernobyl exclusion zone. They said the prevailing winds made it unlikely that ash particles from Chernobyl could have made it to Kyiv. Instead, they said a dust storm was to blame, as well as other wildfires in the area.

So far, according to the State Emergency Service of Ukraine, Kyiv has seen a small jump in radiation levels, but those levels are within the “normal range.” Nevertheless, Ukraine’s Health Ministry advised residents of Kyiv to stay indoors.

Meanwhile, Kyiv—like the rest of Ukraine—remains on lockdown to stop the spread of the novel coronavirus. All nonessential businesses are closed, as are schools, parks, and public transportation. With few exceptions, foreigners aren’t allowed in the country, and air travel is at a standstill. Wearing masks outdoors is mandatory.

So far, Ukraine has been spared a major coronavirus outbreak. As of Friday afternoon, the country reported 4,662 cases, and 125 deaths, from the disease.

The nationwide lockdown, however, has sent the economy into a tailspin. The International Monetary Fund predicts Ukraine’s gross domestic product will fall by almost 8% this year, Ukraine Business News reports.

The fires in the Chernobyl exclusion zone began April 4, initially engulfing about 2,000 acres. Three days later, the fire had doubled in size.

Several abandoned villages reportedly burned down. And, according to government officials, the fire advanced to within half a mile of the Chernobyl nuclear power plant—ground zero of the 1986 nuclear disaster.

Police say a 27-year-old man intentionally started the fire. But fires within the Chernobyl exclusion zone are not unheard of. This year’s extraordinarily mild winter precluded the typical snow cover, leaving topsoil in the zone much drier than usual—a condition that contributed to the fire’s rapid spread, Ukrainian officials say.

After rainstorms Wednesday, Ukraine’s State Environmental Inspectorate reported the fire was out.

“Radiation background is constantly being measured, but the data that we have say it’s generally within the norm,” Yehor Firsov, chairman of the State Environmental, reported Thursday.

That day, however, the fire reportedly was spreading again, according to multiple media reports.

Yaroslav Yemelianenko, head of the Association of Chernobyl Tour Operators, said the fire had reached the outskirts of the abandoned town of Pripyat, advancing to within a mile and a half of the most radioactive real estate within the Chernobyl exclusion zone.

“I hope very much the government’s reaction this time will be immediate, without delay,” Yemelianenko wrote in a Facebook post.

The exclusion zone has become a major tourist attraction in Ukraine, particularly after last year’s popular HBO miniseries depicting the 1986 disaster. A joke making the rounds among Ukrainians on social media is that the wait is officially over for the second season of the HBO show.

Last year, some 124,000 tourists visited the Chernobyl exclusion zone, according to the State Agency for Management of the Exclusion Zone. Already, some 30% of the sites typically visited by tourists within the zone have been destroyed by the fire, Yemelianenko said in an interview with a Ukrainian news outlet.

When it comes to the coronavirus lockdown, Ukrainian President Volodymyr Zelenskyy has been front and center, constantly updating the Ukrainian people though a series of video speeches on the measures his government has taken to stem the spread of COVID-19.

However, there are some who criticize Zelenskyy for not taking a similar approach to updating Ukrainians about the ongoing fires near Chernobyl.

“Zelenskyy hasn’t dealt with the fires at all; it’s like he doesn’t know what to do,” said Alisha Gashek, a resident of Kyiv. “Maybe we’ll get a billion fire extinguishers from China.”

Viktor Zherdytskyi, a political activist who lives in Kyiv, said that, in his estimation, the government isn’t doing enough to stop the fires—or prevent arson—within the Chernobyl exclusion zone.

“The president should declare, and parliament approve, a state of emergency in the Chernobyl area,” Zherdytskyi said. “All state and local resources should be directed to the prevention of arson and the rapid extinguishing of existing fires. And we should contact the international community for emergency technical assistance.”

According to Kyiv, some 415 firefighters were deployed to fight the Chernobyl exclusion zone blaze.

Yet, media coverage of the Chernobyl fires has taken a back seat to other big stories ongoing in Ukraine, including, most notably, coverage about the coronavirus lockdown, as well as a controversial financial sector reform bill facing debate in parliament and a prisoner swap that took place with Russian forces Thursday in Ukraine’s embattled Donbas region to the east.

“There is simply no space for discussion of the fire problem,” Zolotukhin, the information warfare specialist, said. “Coronavirus is filling all the media space. Besides that, there is a pending fight on a bank law [and] Zelenskyy is busy communicating his victory on the exchange of prisoners with [combined Russian-separatist forces].”

Many volunteer firefighters reportedly went out to fight the fire, reminding many Ukrainians of the country’s 2014 grassroots war effort, which effectively reversed Russia’s hybrid warfare takeover of the eastern Donbas region.

“The firemen are working to the bones day and night in the exclusion zone, making heroic efforts,” Zolotukhin said. “We should be thankful to them.”

In April 1986, an explosion ripped through reactor No. 4 at the Chernobyl nuclear power plant, sending a plume of radioactive material into the atmosphere that fatally contaminated the nearby areas and spread radioactive fallout across Europe.

The resulting fire lasted 10 days and released as much radiation as 400 Hiroshima bombs. The disaster killed 31 in its immediate aftermath and likely was responsible for thousands more deaths, according to World Health Organization estimates.

The 50,000 residents of the nearby town of Pripyat were evacuated two days after the nuclear accident.

On May 1, 1986, just days later, the International Workers’ Day parade went ahead as planned in Ukraine’s capital city. On that clear spring day, tens of thousands of people lined Kyiv’s roads, unaware of the radioactive fallout invisibly descending upon them. Decades later, film shot during the parade sparkles and flashes—evidence of radioactive particles on the celluloid.

Today, the so-called exclusion zone extends out along a radius of almost 20 miles from reactor No. 4. No one under 18 is allowed inside this restricted area, and entrants are required to follow strict protocol to prevent radiation contamination.

About 6,000 people work within the Chernobyl exclusion zone. Workers’ shifts are limited to either four- or 15-day stints. Anyone exiting the radioactive areas is required to go through radiation inspection points located at six and 18 miles from reactor No. 4. Authorities confiscate contaminated clothing or shoes, and a facility on the site quarantines individuals whose level of radioactivity exceeds the threshold considered safe for exit.

While radiation levels are highest in the immediate vicinity of reactor No. 4, the danger does not uniformly diminish by distance. The exclusion zone is dotted with radiation “hot spots,” where fallout has accumulated, creating pockets of radioactivity that can be more than 100 times higher than normal levels.

Tour groups travel within a quarter of a mile of the destroyed reactor, which is cocooned under a concrete sarcophagus and a metal containment dome.

The abandoned town of Pripyat is now a case study in the inevitable, unstoppable entropy of nature. Its roads are overgrown with trees and grass, and the concrete buildings are crumbling. In an abandoned school, textbooks dating from the 1980s are covered in dust.

The town is also a snapshot of life at the tail end of the Soviet Union’s lifespan, frozen in the time and day of the 1986 nuclear accident. On the ground floor of the local community center, posters of Vladimir Lenin still hang from the walls.

The Soviet-era Duga-3 ballistic missile defense radar, a popular tourist site within the exclusion zone, reportedly has not been damaged by the fire.