When It Comes to Fighting COVID-19, Let’s Not Emulate China’s Totalitarianism 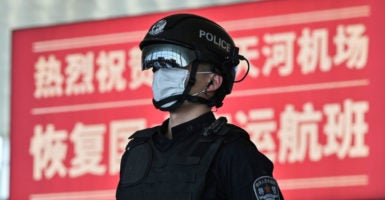 A police officer wearing a face mask stands guard at the Tianhe Airport after it was reopened in Wuhan in China's central Hubei province April 8, 2020. Thousands of Chinese travelers rushed to leave coronavirus-ravaged Wuhan as authorities lifted a more than two-month prohibition on outbound travel from the city where the global pandemic first emerged. (Photo: Hector Retamal/AFP/Getty Images)

The media tell us China “beat coronavirus.” I don’t believe it. The Chinese government lies.

The American Enterprise Institute’s Derek Scissors argues that the Chinese have underreported the number of COVID-19 cases by millions.

Still, it’s possible that China has the virus under control. But at what cost?

Most of us in America now practice “social distancing.” I’ve barely left my house in a month. I do that voluntarily.

More than 40 states do have some sort of shelter-in-place orders, but most of Americans’ social distancing is voluntary.

Not so in China. China’s dictators are quick to take extreme measures against whatever they see as a problem. They locked down Wuhan, closed roads to the city, stopped public transit, and banned private cars.

Chinese police have even welded people into their homes to keep them inside. They’ve tied people to posts for not wearing face masks.

China spies on every citizen, using more than 200 million cameras and social media tracking. Electronic eavesdropping lets them analyze every person’s political leanings and social interactions. They use that to give everyone a “trust” score.

Then the government punishes you by doing things like slowing your internet speed, keeping your kids out of good schools, or stopping you from getting good jobs.

Now, some Americans say our government should be more like China’s.

“Still no nationwide stay-at-home order!” complains MSNBC’s Rachel Maddow—even though that would be unconstitutional, as the 10th Amendment leaves such things to the states.

“You’re walking toward the communists voluntarily! That scares me,” said Li Schoolland, an immigrant from China I interviewed before the pandemic.

“After I came to the United States, I thought, ‘No more politics. I’m in the land of the free,’” she recounts. But after she saw some Americans embracing authoritarian ideas, she thought, “No, I have to tell the American people, ‘Don’t let this happen.’”

Schoolland survived China’s Great Leap Forward, Great Famine, and Cultural Revolution. Her parents were doctors, “intellectuals,” which meant they, and she, were sent to horrible work camps, where they received communist “reeducation.”

I thought this repressive era of communism was over. Starting in the late 1970s, China’s leaders modernized their economy and became a major trading partner with the United States.

But no, “the repression is not over,” says Schoolland. China’s spying on people to create “social trust” scores is an example of it.

That’s something to think about now in America, when so many politicians are eager to do more.

Florida set up checkpoints on highways and planes, requiring people who enter from coronavirus hot spots, such as New York and Louisiana, to self-quarantine for 14 days. Travelers must give officials contact information so officials can check up on them.

Colorado police handcuffed a man for playing softball with his daughter in a park. Father and daughter were more than 6 feet apart, but the officers clustered together to make their arrest.

California police ordered a group of young men to sit on the ground while they photographed them and fined them $1,000 each because they bought beer at a 7-Eleven that was an hour away from their homes.

Of course, in a pandemic, some extreme measures are needed. But repressive government controls like China’s should not be our role model.

The virus began in China and spread further because their autocrats suppressed information, denied the virus could spread between people, and punished scientists who told the truth. Even people who post opinions about the virus may be locked up in China.

I’m glad I live in America, where I’m free to say anything I want about the virus—or my government.