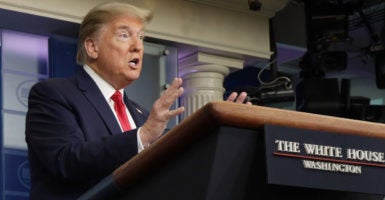 President Trump called the VOA’s coverage of the COVID-19 crisis “disgusting” and a “disgrace,” and accused it of bias and of spreading Chinese propaganda about the coronavirus. Pictured: Trump speaks during the daily briefing of the White House Coronavirus Task Force April 13, 2020 in Washington, D.C. (Photo: Alex Wong/Getty Images)

At his April 15 press conference, President Donald Trump launched into a fierce attack on the Voice of America, the U.S. government’s broadcasting entity that reaches out to the world in 47 different languages and is a part of the U.S. Agency for Global Media.

The president called the VOA’s coverage of the COVID-19 crisis “disgusting” and a “disgrace,” and accused it of bias and of spreading Chinese propaganda about the coronavirus.

That’s an extraordinary state of affairs, with the executive branch attacking itself, no less.

Trump then threatened to recess Congress in order to be able to make recess appointments for positions that Democrats in the Senate have blocked, in some cases for years.

One case of particular relevance to Trump’s irate accusations is that of Michael Pack, a documentary filmmaker and former president of the Claremont Institute.

Pack was nominated two years ago by Trump to fill the position of chief executive officer of the Broadcasting Board of Governors, as the U.S. Agency for Global Media used to be called.

He was renominated in January, and performed well in confirmation hearings before the Senate Foreign Relations Committee, only to face a stone wall off opposition and obstructionism by Senate Democrats.

Meanwhile, the largely anti-Trump leadership of U.S. Agency for Global Media has entrenched itself.

Following the 2016 election, a slew of leaks to the media suggested that management and reporters were in despair, fearing the VOA would become a propaganda organ for Trump.

The opposite has happened.

Bennett and the CEO who hired her for the position at VOA, John Lansing (who recently moved to NPR), were both appointees of President Barack Obama.

The board overseeing the work of the U.S. Agency for Global Media is composed of Democrats and Republicans in equal numbers, but even the Republicans on the board are dominated by so-called Never-Trumpers.

Under Bennett’s leadership, the coverage of the coronavirus has been influenced by Chinese propaganda.

The VOA is far from alone in this among the U.S. media, but its charter mandates that it should reflect U.S. government policy.

1) VOA will serve as a consistently reliable and authoritative source of news. VOA news will be accurate, objective, and comprehensive.

2) VOA will represent America, not any single segment of American society, and will therefore present a balanced and comprehensive projection of significant American thought and institutions.

3) VOA will present the policies of the United States clearly and effectively, and will also present responsible discussions and opinion on these policies.

Instead, last week, the VOA praised China’s Wuhan lockdown as a successful “model” copied by much of the rest of the world to end the quarantine. VOA even tweeted out video of the communist government’s light show at the quarantine’s alleged end.

The VOA went a step further, creating graphics with communist government statistics to compare China’s coronavirus death toll to America’s. But there is simply no way to verify China’s statistics, especially in light of China’s secretive and culpable handling of the origins of the pandemic.

Secretary of State Mike Pompeo stated in his appearance on March 27, 2019, before the House Appropriations Committee’s state, foreign operations and related programs subcommittee:

I would urge to get a CEO of that organization in place so that the [Broadcasting Board of Governors] will have the right leadership, so they can do the traditional mission; perhaps in a different information environment than we did back in the Cold War, but can perform its function in a way that is important and noble, and reflects the enormous resources that … American taxpayers have put towards that.

In an April 14 op-ed column in The Washington Times, Cliff May, president of the Foundation for Defense of Democracies, wrote that Trump “in theory, should have someone he trusts heading the VOA and other taxpayer-funded, U.S. overseas broadcasting services, including Radio Free Europe/Radio Liberty, Radio Free Asia and the Middle East Broadcasting Networks,” adding:

In practice, however, President Trump has been deprived of that prerogative, with much of the media cheering.

The Senate needs urgently to do its job and allow Trump to have the leaders he needs under these extraordinarily challenging times.