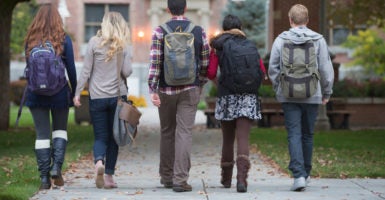 America’s colleges are rife with corruption. The financial squeeze resulting from the new coronavirus offers opportunities for a bit of remediation.

Let’s first examine what might be the root of academic corruption, suggested by the title of a recent study, “Academic Grievance Studies and the Corruption of Scholarship.”

The study was done by Areo, an opinion and analysis digital magazine. By the way, Areo is short for “Areopagitica,” a speech delivered by John Milton to the British Parliament in 1644 in defense of free speech.

Authors Helen Pluckrose, James A. Lindsay, and Peter Boghossian say that something has gone drastically wrong in academia, especially within certain fields within the humanities.

They call these fields “grievance studies,” where scholarship is not so much based upon finding truth, but upon attending to social grievances. Grievance scholars bully students, administrators, and other departments into adhering to their worldview.

The worldview they promote is neither scientific nor rigorous. Grievance studies consist of disciplines such as sociology; anthropology; gender studies; and queer, sexuality, and critical race studies.

In 2017 and 2018, authors Pluckrose, Lindsay, and Boghossian started submitting bogus academic papers to academic journals in cultural, queer, race, gender, fat, and sexuality studies to determine if they would pass peer review and be accepted for publication.

Acceptance of dubious research that journal editors found sympathetic to their intersectional or postmodern leftist vision of the world proves the problem of low academic standards.

Several of the fake research papers were accepted for publication. The Fat Studies journal published a hoax paper that argued the term bodybuilding was exclusionary and should be replaced with “fat bodybuilding, as a fat-inclusive politicized performance.”

One reviewer said, “I thoroughly enjoyed reading this article, and believe it has an important contribution to make to the field and this journal.”

“Our Struggle Is My Struggle: Solidarity Feminism as an Intersectional Reply to Neoliberal and Choice Feminism” was accepted for publication by Affilia, a feminist journal for social workers.

The paper consisted in part of a rewritten passage from “Mein Kampf.”

Two other hoax papers were published, including “Rape Culture and Queer Performativity at Urban Dog Parks.” This paper’s subject was dog-on-dog rape.

But the dog rape paper eventually forced Boghossian, Pluckrose, and Lindsay to prematurely “out” themselves. A Wall Street Journal writer had figured out what they were doing.

Some papers accepted for publication in academic journals advocated training men like dogs and punishing white male college students for historical slavery by asking them to sit in silence on the floor in chains during class and to be expected to learn from the discomfort.

Political scientist Zach Goldberg ran certain grievance studies concepts through the LexisNexis database to see how often they appeared in our press over the years. He found huge increases in the usages of “white privilege,” “unconscious bias,” “critical race theory,” and “whiteness.”

All of this is being taught to college students, many of whom become primary and secondary school teachers who then indoctrinate our young people.

I doubt whether the coronavirus-caused financial crunch will give college and university administrators—who are a crossbreed between a parrot and jellyfish—the guts and backbone to restore academic respectability.

Far too often, they get much of their political support from campus grievance people who are members of the faculty and of diversity and multicultural administrative offices.

The best hope lies with boards of trustees, though many serve as “yes men” for the university president.

I think that a good start would be to find 1950s or 1960s catalogs. Look at the course offerings at a time when college graduates knew how to read, write, and compute, and make them today’s curriculums.

Another helpful tool would be to give careful consideration to eliminating all classes, majors, and minors containing the word “studies,” such as women’s, Asian, black, or queer studies.

I’d bet that by restoring the traditional academic mission to colleges, they would put a serious dent into the COVID-19 budget shortfall.