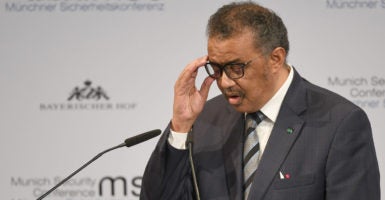 President Donald Trump announced Tuesday that he is halting funding to the World Health Organization while his administration conducts a review of the U.N. entity’s mismanagement of the response to COVID-19.

The president is correct in noting that, had China been more transparent and cooperative, many lives could have been saved and economic damage avoided, and that the World Health Organization was too willing to take Chinese assurances at face value and was too slow to respond.

The WHO needs to be held accountable and reformed to prevent repetition of these missteps, but the U.S. should be focused on how best to pursue that goal.

The details of the president’s policy are unclear, particularly with respect to how it will be implemented and its impact.

The United States is the largest funder of the World Health Organization. According to the WHO, the U.S. provided $893 million, which was 15.9% of total WHO contributions to the 2018-2019 WHO two-year budget through the third quarter of 2019.

Moreover, because of the current crisis, the U.S. likely expedited allocation of its voluntary contributions appropriated for this year.

In other words, the decision to halt funding might not actually have much of a short-term financial impact on the WHO.

Perhaps that was the intent of the announcement—not to undermine the WHO’s response in the current crisis, but to signal U.S. dissatisfaction and to use its upcoming funding to leverage reforms.

But that’s not how it’s being interpreted. Already, other countries have expressed regret or condemnation of the decision. Perhaps the most cynical is China, which is calling on the U.S. to “fulfill its obligations to the World Health Organization.”

To better ensure that the intent of the administration is understood, the State Department should release a fact sheet clarifying what funding the U.S. has provided to the WHO in 2020; what funds will be halted immediately under this policy; and what additional support the U.S. is providing to other international organizations and bilaterally to individual countries to assist them in responding to COVID-19.

These demands are reasonable and justified given recent events and would help focus the World Health Organization on communicable diseases and responding to future international health emergencies, which would benefit every nation.