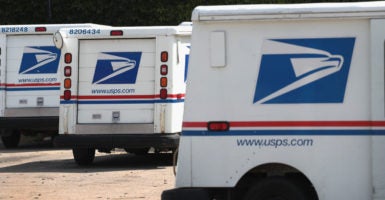 Unsustainable wage and benefit costs, along with unaffordable and inefficient service requirements in light of reduced demand—not the novel coronavirus of 2019—are the real reasons for the Postal Service’s financial troubles. Pictured: Trucks are parked at a postal facility on Aug. 15, 2019, in Chicago. (Photo: Scott Olson/Getty Images)

Democrats and U.S. Postal Service officials are seeking a $75 billion bailout from taxpayers.

While they seek to blame the COVID-19 pandemic, the facts are plain. Unsustainable wage and benefit costs, along with unaffordable and inefficient service requirements in light of reduced demand—not the new coronavirus—are the real reasons for the Postal Service’s financial troubles.

In fiscal 2019, a time when the overall economy was still thriving, the Postal Service lost a whopping $8.8 billion. It has suffered an operating deficit for 13 years in a row.

All of this predates the new coronavirus.

During debate over the $2.3 trillion CARES Act, House Democrats sought $25 billion in subsidies, $11 billion in loan forgiveness, and a $15 billion loan for the Postal Service. The final CARES Act legislation provided USPS with a $10 billion loan while the calls for a much larger handout have continued unabated.

The financial vulnerability of the Postal Service is not a new development. The nonpartisan Government Accountability Office has cited Postal Service finances as a worsening “high-risk” concern since 2009.

This GAO assessment was based on basic math and obvious trends: First-class mail volume declined due to the proliferation of electronic communications, while USPS labor costs continue to escalate.

More than three-quarters of Postal Service expenses are for employee compensation. That includes salaries for mail deliverers, sorters, and post office clerks, along with health and pension benefits for retirees.

The importance of that final component cannot be overstated. A Treasury Department report from December 2018 showed that the Postal Service faces more than $120 billion in unfunded liabilities for retiree benefits.

The Postal Service is required by law to fund the expected future cost of retiree pension and health benefits to prevent a future taxpayer bailout. The House voted to remove the prepayment requirement in February, on the grounds that it would improve immediate Postal Service finances. That would only mask the organization’s liabilities and increase the financial risk for taxpayers.

President Donald Trump’s most recent budget includes a Postal Service reform plan that would save $91 billion over the next decade. Many aspects of the president’s postal reform are similar to other proposals, such as a Heritage Foundation plan from 2013.

While part of the solution involves finding ways to potentially increase Postal Service revenue, the most important thing is to reduce costs.

Cost efficiencies for the Postal Service could include streamlining the number of post office locations to better fit in-person demand, changing delivery schedules to be in line with a lower volume of mail, and responsibly adjusting compensation levels.

Congress has failed to act on these long-standing ideas, largely due to political disincentives. After all, many legislators use post office naming rights as a way to curry favor with constituents, passing dozens of laws every year to that effect.

Perhaps most importantly, the American Postal Workers Union (representing hundreds of thousands of workers) is vocal in support of continuing the broken status quo. Too many members of Congress place the demands of well-organized unions above consideration of what’s fair to taxpaying constituents.

Make no mistake, however: The Postal Service is in trouble. The solution is not handing it the equivalent of a blank check to enable larger and larger losses of public money. That would merely put a Band-Aid on a gushing wound.

Rather than capitulating to opportunistic demands and catastrophic rhetoric, Congress should work on a plan to lift unsustainable mandates on the Postal Service and ensure that taxpayers are protected from unfunded liabilities.

Congress has ignored the systemic problems hamstringing the Postal Service for too long.

Lawmakers should not put taxpayers on the hook for tens of billions of dollars in bailouts to put off politically inconvenient reforms. USPS needs real, structural reforms—even after the COVID-19 crisis abates.