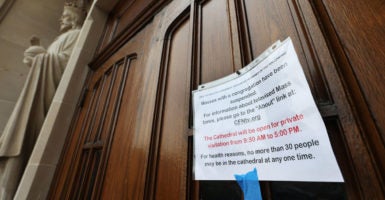 A sign announcing the suspension of masses due to the coronavirus outbreak is shown outside the St. Agnes Cathedral March 20 in Rockville Centre, New York. (Photo: Al Bello/Getty Images)

As the coronavirus continues to rapidly spread, many state and local governments are issuing shelter-in-place and stay-at-home orders backed by criminal penalties.

What do these mean for the spiritual life of Americans—particularly with Passover and Easter coming soon?

It’s important to first note that these orders do not target or single out houses of worship for closure or prohibit any meetings. Doing so would be an immediate sign of religious discrimination.

Rather, these orders start with prohibiting gatherings of all kinds with more than a specified number of people. The specific impact on churches is then determined by whether churches or church attendance are covered by any of the exemptions that each of these orders includes.

Some states, including California, Louisiana, Michigan, New York, Ohio, and Pennsylvania include houses of worship in a list of “essential” businesses or exempt them from any penalties for gatherings that exceed the attendance limit.

This can be a challenging policy because it typically still comes with a physical distance requirement, which might be even more difficult to enforce for churches than in other settings.

Most churches, mosques, synagogues, and other houses of worship, though, are covered by these orders, and the vast majority are complying by suspending in-person services.

The Church of Jesus Christ of Latter-day Saints, for example, suspended in-person gatherings worldwide in early March, and Catholic bishops across the country are providing a dispensation from the obligation to attend mass on Sundays.

Necessity, they say, is the mother of invention and many faith leaders are finding creative alternatives, such as livestreaming or drive-in services, to meet members’ spiritual needs during this challenging time.

A few individual houses of worship have chosen to defy these orders, citing their First Amendment right to freely exercise religion or claiming that applying such orders to churches amounts to religious persecution.

For example, Rodney Howard-Browne, pastor of a large Pentecostal church in Tampa, Florida, was arrested after holding Sunday services despite a county order not to gather.

A group of pastors in Texas is challenging a court order mandating that worship services be conducted by video or teleconference and that faith leaders’ in-person ministry follow the Centers for Disease Control and Prevention guidelines.

The First Amendment protects the free exercise of religion, but it is not absolute. Federal law prohibits the government from placing a substantial burden on the exercise of religion, unless that burden advances a compelling interest in the least restrictive way possible, and many states have similar laws. But just what makes a reason “compelling”?

There may not be a specific definition, but strict scrutiny is the toughest standard when it comes to government actions that might burden individual rights. It applies to laws that restrict speech, religion, and other fundamental rights, or that involve race. One study of federal courts’ use of strict scrutiny review shows that challenged laws survive roughly 30% of the time.

While the Supreme Court has long been skeptical of government forcing someone to choose between complying with the tenets of his faith or the law, it has upheld compulsory vaccination laws, mandatory social security payments, child labor laws, and outlawing polygamy over religious objections.

In a 1972 decision, the court sided with Amish parents who refused, for religious reasons, to send their teenage children to high school. The court explained that “only those interests of the highest order and those not otherwise served can overbalance legitimate claims to the free exercise of religion.”

There’s no doubt that temporarily prohibiting gatherings of even modest size places a substantial burden on the exercise of religion.

On the other side of the equation, however, safeguarding the health of Americans against COVID-19 undoubtedly rises to the “highest order.”

Moreover, it is not just parishioners who are in jeopardy should they defy a ban on such gatherings, but everyone an infected parishioner comes in contact with thereafter.

Given the lack of a vaccine and what we already know about how COVID-19 is transmitted, a temporary prohibition on such gatherings is likely the least restrictive choice for government policy.

These orders have specific and relatively near-term expiration dates, so that the continued need for these restrictions can be frequently reviewed. That will help ensure that state and local governments limit religious exercise only when and how it is necessary.

Careless threats like New York City Mayor Bill de Blasio’s warning that he may permanently close churches that flout his orders are not only counterproductive but would clearly flunk constitutional review.

Let’s hope it doesn’t come to that.

In these uncertain times, we must put aside our differences—whether they are political, religious, or otherwise—and band together to overcome the coronavirus.

Religious leaders should exercise good judgment about how to serve their communities during this difficult time, and government officials should recognize that they need partners in religious communities to continue their ministries, feeding and clothing those in need and providing spiritual guidance to those who feel scared and alone.