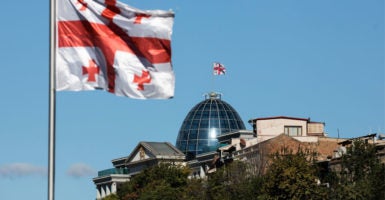 A view of the presidential administration of Georgia, located in Tbilisi. (Photo: Mikhail Japaridze\TASS\Getty Images)

The South Caucasus nation of Georgia has become an important partner for the United States on a range of critical global issues.

The small but strategically located nation is on the front lines of efforts to contain Russian expansionism, and it has contributed thousands of troops to support U.S. efforts in Iraq and Afghanistan. Now, the country is partnering with the U.S. in the fight against the COVID-19 coronavirus pandemic.

Central to that partnership is the Richard G. Lugar Center for Public Health Research—a U.S.-funded research lab on the outskirts of the nation’s capital, Tbilisi—which was founded “with the aim of limiting the spread of disease in the region and dealing with deadly pathogens left over from the Soviet Union’s bio-warfare program.”

In operation since 2013, the lab has now become a key resource in the fight against the coronavirus, “testing hundreds of samples and turning results around in under 24 hours.”

With advanced-technology capacity that is unique for the region, the Lugar Center lab has begun to contribute to broader international research on the coronavirus’s behavior, too.

The practical health partnership between the United States and Georgia has had broad benefits for the people of a country that is growing fast but remains one of the poorest in Europe.

As highlighted by the Centers for Disease Control and Prevention in 2019, “Despite the challenges of rebuilding after the fall of the Soviet Union … Georgia has persevered and has become a model country for public health and global health security.”

In dealing with the ongoing coronavirus pandemic, as U.S. Ambassador to Georgia Kelly Degnan recently pointed out, Georgia has taken proactive steps to “contain the spread of the COVID-19 virus and minimize its impacts.”

As of April 7, the country had had only two fatalities from the deadly disease.

As in past crises and challenges, Georgia is proving in the current pandemic to be a dependable ally for the United States. Located at the strategic geopolitical crossroads of Europe and Asia, the country stands out as one of the most notable emerging economies in the world.

Over the past 25 years, Georgia has made tremendous progress in integrating with the West and moving toward a more market-oriented economy.

Since 1996, when The Heritage Foundation began including the country in its annual Index of Economic Freedom, the Georgian economy has moved up from the ranks of economically “repressed” to “mostly free.”

According to the latest edition of the index, Georgia’s economic freedom score is well above the regional and world averages, and multiyear reforms to open markets, cut regulation, and simplify taxes have led to the modernization and upgrade of the country’s economic system.

In fact, the country this year replaced the United States as the 12th-freest in the world.

This is an important year for Georgia-U.S. cooperation, with a number of important economic projects, including construction of a stalled deep water port on the Black Sea, a possible free trade agreement between the two countries, and ongoing efforts to deepen defense ties, both bilaterally and through NATO.

America’s enduring relationship with Georgia, based on shared values and common interests, is strong and highly beneficial to both countries.

As Vice President Mike Pence remarked during his August 2017 visit to Georgia to commemorate the 25th anniversary of America’s diplomatic relationship with Georgia:

Nowhere is the bond between our two nations stronger than in our shared effort to promote security and stability across the wider world. Georgia is a key strategic partner of the United States of America.

Indeed, Georgia has proved that it deserves U.S. commitment and a stronger alliance.