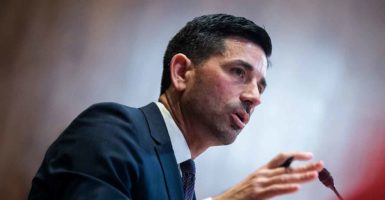 Chad Wolf, acting secretary of the Department of Homeland Security, joined The Daily Signal Podcast at the Conservative Political Action Conference earlier this year to detail progress on President Donald Trump’s wall at the U.S. border with Mexico. Read a lightly edited transcript of the interview, posted below, or listen to the podcast:

Plus: Andy Ngo, the journalist who was attacked by Antifa last June, joins the podcast to reflect on socialism versus the American dream. We also cover these stories:

The Daily Signal Podcast is available on Ricochet, Apple Podcasts, Pippa, Google Play, or Stitcher. All of our podcasts can be foundat DailySignal.com/podcasts. If you like what you hear, please leave a review. You can also leave us a message at 202-608-6205 or write us at letters@dailysignal.com. Enjoy the show!

Rachel del Guidice: We are joined today on The Daily Signal Podcast by Chad Wolf. He’s the acting secretary of the Department of Homeland Security. Chad, thank you so much for being with us today.

Chad Wolf: I appreciate it. Thank you for having me.

Del Guidice: So Chief Rodney Scott, who works at the U.S. Border Patrol, he recently announced that 126 miles of the border has been completed. There are 213 miles under construction and 414 miles on pre-construction. Can you tell us about those landmarks that have been reached?

Wolf: Yeah, it’s very exciting. At the end of this calendar year we hope to have 450 miles built. So that’s [a] new wall system, border wall system. That’s new capability for the Border Patrol agents that they’ve never had before.

So we’re replacing 6-, 7-, 8-foot-high 1970s-era landing mat fence with bollard fencing that’s 8- to 30-feet-high. But it’s not only that physical infrastructure, it’s the cameras, the roads, the lighting, the fiber optic cables. It’s that whole border wall system that gives them capabilities that they’d never had before.

And again, as I go down to the border and I talked to the Border Patrol agents, first thing I asked them was, “What do you need to secure the border?” It’s an effective border wall system is the first thing that they tell me.

Del Guidice: Can you tell us a little bit about all the work that went [into] reaching those landmarks? You all have been busy making this happen. Can you give a little bit of a sneak peek into everything that went into this whole project?

So CBP, Customs and Border Protection, takes the operators, takes their input, puts it into what we call our Border Security Improvement Plan, our BSIP. We share that with Congress and then we fund that.

We work with Congress to fund that and I think what’s been actually remarkable from President [Donald] Trump is, as Congress would not fund that or choose to fund it in very small slices, he used the authority that Congress had given him to find additional funding.

So we have about $15 billion today that we continue to build border wall funding. It’s going to include over 700 miles, as I indicated, [we] hope to have 450 [miles] done at the end of this calendar year and we’ll continue to build and continue to work with Congress and others to make sure that that capability and system is where it needs to be along the southwest boarder.

Del Guidce: In your travels to the border as well as throughout the country and all the work that you do, is there a particular story or incident that really captures the severity of the situation and why we need to work on our southern border?

Wolf: Yeah. I was in Tucson on the hundredth mile that we put in, I believe that was in January, and we were in an area that we were replacing what we call Normandy barriers, they’re vehicle barriers.

It’s basically an X, it’s about 4 and a half feet tall. You can jump over it, you can go under it, you go around it very easy. We were replacing that with 30-foot-high bollard wall.

I was talking to the chief there and asking what type of traffic … came through. And that was one of their busiest areas because it was just right across the river. The river is not very large there. And they were saying that individuals would just come over in droves.

What that would require them to do is to surge Border Patrol agents there. And as they did … the adversary would do that for particular reason and then they would sneak in other individuals further down the line.

So we want to make sure that we’re able to make sure we get Border Patrol agents where they need to be. We put up physical infrastructure to funnel them to certain places that are easier to patrol, easier to apprehend individuals. And so that story really hit home to me.

… I’m sure we can show you some photos, as you look at the 4-foot-high wall and then the 30-foot-high, it’s that impedance and denial.

So a lot of individuals talk to me about how walls could be defeated, and I don’t disagree, although this wall was very difficult to defeat. This is all about impedance and denial.

It may take someone seven minutes, eight minutes, 10 minutes, 12 minutes to get above and around that wall. What that allows us to do is [place] the Border Patrol agents waiting for him.

There’s no more hopping the fence in 30 seconds and then getting away into the interior of the country. We have a number of capabilities there that allows that Border Patrol agent be waiting on those individuals that are trying to, again, illegally enter the country.

Del Guidice: I actually was in Tucson about two weeks ago and we met with Sheriff [Mark] Lamb, Pinal County, and he does a lot of work with drug trafficking there.

Something he mentioned when we were talking with him is how a lot of times when Border Patrol is out working, if an illegal immigrant is caught in the desert, they don’t have enough food or water. They call 911, Border Patrol is called. And he said a lot of Americans don’t realize the amount of humanitarian work the Border Patrol does. Can you talk a little bit about that?

Wolf: It’s actually fascinating and, as you said, … humanitarians are what our Border Patrol agents end up being. They do a number of rescues every single day, rescuing individuals that are making this very dangerous journey.

And we have to think about the individuals that are coming across the border. They’re likely being smuggled from a transnational criminal organization that they’ve paid thousands of dollars. They’ve probably been on a very dangerous journey for many, many weeks, maybe even a month.

They come to our southwest border. Those individuals just turn them over. And so you’re in the middle of the desert, and most cases are in the wilderness, … most cases [are] not near a city. And you’re not sure what to do. So you … get lost, you run out of water, you do a number of things. And Border Patrol are out there saving individuals, again, with local law enforcement.

I will say that our local law enforcement, our sheriffs along the southwest border are also on the front lines of this. It’s their communities that these individuals are coming into either legally or illegally that they have to deal with.

But Border Patrol agents every day are rescuing individuals crossing the river, in the desert, running out of water and the like. So it’s an incredible mission that they do.

Del Guidice: On the topic of the humanitarian crisis, I know you do a lot of response with human trafficking issues like that. Can you talk a little bit about the response of Border Patrol when it comes to human trafficking?

Wolf: Sure. What we saw last year is a number of growing incidents of human trafficking. And I think where this really hit home for me is [with] an operation that we discovered. Our ICE Homeland Security investigators discovered along with Border Patrol what we call child recycling.

So what we saw is an individual coming in with a child, we would see that same child perhaps several weeks later with another adult claiming to be their parent. And then a couple of weeks later, same child.

After time we started investigating and looking at this and it was a ring where they would come in and the child would be sent back to central America, Mexico, and again, using that. So it’s very, very disturbing. Obviously, it’s very, very dangerous for that child. And again, it’s exploiting our immigration system.

I will say some of the laws that we see across this country, particularly in New York, [are] very troubling where we’ve talked about sanctuary policies or the lack of information sharing with DHS and it impacts enforcing criminal laws like human trafficking, where our law enforcement agents don’t have the information they need to do their job. And it’s very dangerous.

Del Guidice: Well, Secretary Wolf, thank you so much for joining us today on The Daily Signal Podcast.