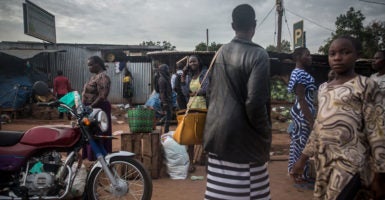 Residents visit a market in Kampala, Uganda, on March 28. Because of the coronavirus, Uganda's government has imposed restrictions on business, education, and travel. (Photo: Sally Hayden/SOPA Images/LightRocket/ Getty Images)

We know too little about the new coronavirus to say how it will progress in Africa, but we know enough to realize it is likely to pummel the continent.

As of April 6, Johns Hopkins University reported confirmed cases of COVID-19 in 51 of Africa’s 54 countries, with a total of over 9,400 cases. The number is well below most of the world’s regions, but the coronavirus that causes the disease came late to the continent and is just now gathering steam.

Many of Africa’s countries have weak health care systems that easily could be overwhelmed by COVID-19 cases. Thirty-three countries in Africa fall into the “least prepared” category of the Global Health Security Index.

Deadly diseases already strain African health care. Just as an Ebola outbreak in West Africa in 2014-2015 led to an estimated 10,000 excess deaths from HIV/AIDS, malaria, and tuberculosis, COVID-19 cases are likely to consume scarce medical resources, increasing the toll from other diseases.

Violent instability grips parts of the continent, and terrorist activity has turned entire swathes of countries—northern Mali, for instance, or northeast Nigeria—into no-go zones. Militia attacks on health care workers in the Democratic Republic of the Congo was a primary impediment to containing the recent Ebola outbreak there.

The inadequate governments burdening many of Africa’s countries will hamper an effective response as well. Citizens may be tempted to ignore public health orders because they distrust the governments issuing them, often for good reason.

The spectacle of soldiers and police abusing civilians in Kenya and South Africa to enforce lockdown measures illustrates the problem.

Many Africans won’t be able to follow all the recommended mitigation strategies even if they want to, and their governments will struggle to enforce lockdowns. The porous borders of African countries allow people to move easily and undetected throughout the continent.

Sub-Saharan Africa also has more extremely poor residents—more than 400 million in 2015—than any other region. Those living meal to meal do not have the luxury of sheltering in place for long.

Social distancing will be impossible in many of Africa’s densely packed slums—home to almost half of its urban population—as will frequent hand-washing where water and soap can be in short supply.

Some of the continent’s many refugees and internally displaced people also are clustered in densely packed camps with limited medical facilities, which will further complicate enforcing lockdowns.

The COVID-19 crisis is piggybacking on the oil price war that sent oil prices plummeting, a double blow to government revenues of some of Africa’s largest and most oil-dependent economies, such as Nigeria and Angola.

African governments have taken on additional debt recently as well; the International Monetary Fund reports that 16 African countries are in debt distress or at high risk of falling into distress. Those governments now have fewer funds available—and fewer means to raise more—to launch the necessary but costly response to COVID-19.

Finally, most of the continent is moving into fall weather. The coronavirus may prefer the cold, meaning any protection Africa received from its hot weather is now crumbling.

Not all the news is bad for Africa. Its inhabitants on average are the world’s youngest—the median age is below 20 in sub-Saharan Africa—and the virus does not readily kill the young. Because COVID-19 was comparatively slow to reach the continent, governments have the advantage of learning from other countries’ experiences, and some already have launched aggressive lockdowns.

Although this is a new coronavirus, many African medical professionals have hard-won experience responding to epidemics such as Ebola that can help inform the battle against COVID-19.

The U.S. at some point will have a sufficient handle on this disease that it can focus on increasing help to other regions. African countries likely still will be in the midst of their battle with COVID-19 and should be some of the first countries to draw increased American attention.