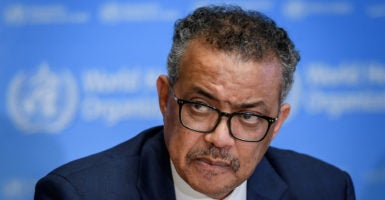 For over a decade, China has conducted a broad campaign to reshape the international system into a new, post-American global order.

In this effort, it is essential that China project an image of being supremely capable and powerful, thereby demonstrating that China—not Europe or the United States—is the best model for governance and economic development.

The coronavirus pandemic undermines this carefully-constructed image, because Beijing’s response to the disease enabled its spread, to the detriment of public health and economies throughout the world.

This directly threatens China’s long-term goal, so Beijing is desperately trying to reshape perceptions of the situation to its advantage. The World Health Organization and its director-general, Tedros Adhanom Ghebreyesus, appear to have been willing pawns in Beijing’s gambit.

At National Review, Jim Geraghty has laid out in a useful timeline the World Health Organization’s and China’s actions early in the outbreak. After detecting the virus in late November, Chinese authorities reacted by suppressing details of the disease and punishing doctors who tried to alert the public and the world.

China did not inform the World Health Organization about the virus until Dec. 31.

Beijing continued to suppress information about human-to-human transmission of the disease, allowing infected individuals to travel abroad well into January. The mayor of Wuhan later admitted that perhaps 5 million Chinese people had left the city before imposition of a lockdown.

The willingness of the World Health Organization to take Beijing’s statements at face value arguably paved the way for international pandemic.

On Jan. 23, for example, the World Health Organization tweeted: “For the moment, [the] W[orld] H[ealth] O[rganization] does not recommend any broader restrictions on travel or trade. We recommend exit screening at airports as part of a comprehensive set of containment measures.”

In February, after the U.S. imposed travel restrictions on China, Tedros publicly chastised countries for adopting the policy.

After visiting China in late January, Tedros announced that Beijing had set “a new standard for outbreak control” and praised Chinese actions that “bought the world time, even though those steps have come at greater cost to China itself.”

It was not until the following month, after weeks of negotiations with the Chinese government, that a World Health Organization team finally was dispatched to China.

We now know that many people infected with COVID-19 are asymptomatic but contagious, and that Chinese travelers spread the disease to other countries. The World Health Organization might have known this earlier, but chose to ignore warnings from Taiwan “about the human-to-human transmission of the Wuhan coronavirus (COVID-19) in December of last year.”

Of course, the World Health Organization does not let Taiwan participate in its meetings, due to Chinese objections over political matters that have nothing to do with public health.

More recently, China has claimed that it has stopped COVID-19 domestically, and the World Health Organization has warned that the U.S. could become the “epicenter.”

However, much evidence suggests that China has underreported its COVID-19 deaths and is manipulating public data by excluding a large number of asymptomatic individuals who have tested positive.

Nonetheless, Tedros has stuck with his pro-China message, praising Beijing’s “transparency,” calling its response “impressive,” and applauding its claim of zero new domestic COVID-19 cases as an “amazing achievement.”

Leading World Health Organization physician Bruce Aylward joined the chorus, stating: “If I had COVID-19, I would want to be treated in China.”

Given this history, the World Health Organization’s willingness to take China’s statements at face value is shocking. The record over the past few months leaves no doubt as to why Chinese President Xi Jinping has expressed his “firm support” for Tedros.

In recent weeks, Beijing has engaged in a widespread propaganda and disinformation campaign to exculpate itself from its fatal mishandling of the coronavirus outbreak.

The truth is that China had an opportunity early on to forestall the spread of COVID-19 and alert the world about the threat and chose, instead, to try to protect its reputation—with a shameful assist from Tedros.