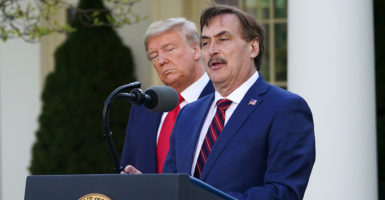 MyPillow CEO Michael Lindell, a self-made former crack addict, is going to transform 75% of his manufacturing capacity to make 10,000 cotton face masks per day by the end of the week, ramping up production to 50,000 a day in a month.

That sounds like a patriotic act to me, especially given that Lindell is undertaking the effort without being forced to do so by a federal agency. I hope the guy becomes a billionaire after this is all over.

NBC? Not so much. The headline on its “analysis” of Lindell’s remarks was “Trump fluffs MyPillow in Rose Garden.”

This matched the basic tone taken by a large faction within the political press. Why? Presumably because, at the end of his remarks, Lindell claimed that the Lord Almighty had helped elect Donald Trump president to save our once-beleaguered nation from its alleged depravations.

Listen, if there is a God, I hope He refrains from tipping the scales of presidential contests. But it’s not surprising to hear an evangelical Christian talking about the world this way—unless, that is, you’ve never met one.

Of course, anyone who shows anything less than hostility toward the president is immediately cast as a reactionary and their actions dismissed as questionable and self-serving.

Many of the CEOs who have stood with Trump at his press conferences—this week, or in weeks prior—hold varying religious and partisan beliefs. The press didn’t have similar qualms about the CEOs of CVS or Walgreens, because they kept their views to themselves.

Lindell is a villain for speaking his truth, as the kids say. Yet the real heroes of our age—White House political correspondents—are applauded for speaking theirs.

Yesterday, PBS’ Yamiche Alcindor, one of the many pundits masquerading as a dispassionate journalist, was chided by Trump during his presser.

Immediately, journalists, who are perhaps the most tribalistic group in American political life, rallied around her with fawning tributes to her bravery and victimhood (because Trump only lashes out at black women, apparently). #WeLoveYamiche is the hashtag, if you’re interested.

Philip Rucker of The Washington Post noted that Alcindor “routinely gets under his skin with probing questions,” as if rattling our irascible president was a noteworthy accomplishment, or an act of heroism, or, in and of itself, a reliable indication that a reporter is doing a good job.

The Post’s media critic, Erik Wemple, meanwhile, was forced to reimagine what Alcindor’s question might have sounded like had it been more coherent. And, simply because Trump had been rude to her, he claimed that Alcindor has now become “the symbol of American journalism.”

It’s Alcindor’s prerogative to try and bait the president, as she has done on numerous occasions over the past weeks, and it’s PBS’ prerogative to send her to ask questions that do absolutely nothing to help the public gain a better understanding of the government’s efforts to fight the coronavirus. But we should not forget that most of her narcissistic defenders are really talking about themselves.

Some journalists are indeed on the front lines of “war zones, refugee crises, genocides,” as CNN’s S. E. Cupp put it recently. But Alcindor, whose Twitter feed is littered with all kinds of absurdity, is not.

She risks absolutely nothing by asking the president questions. Like Jim Acosta, who titled his book, “Enemy of the People: A Dangerous Time to Tell the Truth in America,” she is stealing valor.

The overall breadth and intensity of the anti-Trump press demonstrates there are few inhibitions and zero limitations on free press (though many in the media do advocate to limit your free speech). No one has been stopped from engaging, investigating, writing, or sharing their antagonism toward Trump. Nor should they.

Some lucky Americans, such as Alcindor, are afforded the benefit of challenging the president personally. That’s fine. I wish the press had exhibited the same level of reflexive antagonism toward every president. They don’t.

But Lindell’s political and religious views do not diminish his patriotic act, just as Alcindor’s ability to make the president mad does not transform her into a hero. It doesn’t even make her good at her job.

Perhaps our media culture has spent so much time politicizing the world that they’ve confused patriotism with victimhood. Or maybe they’re so obsessed with fighting the president that they can’t recognize that his fans might be capable of a good deed.

But if where you stand on Trump is your guiding definition of patriotism and heroism, your moral compass might be broken.