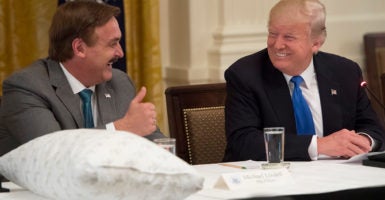 Michael Lindell, the CEO of MyPillow, chats with President Donald Trump at the White House on July 19, 2017. MyPillow is aiming to manufacture 50,000 face masks a day to aid in the fight against COVID-19. (Photo: Saul Loeb/AFP via Getty Images)

Michael Lindell, the inventor and CEO of MyPillow, stood outside the White House on Monday as a guest during the daily coronavirus task force briefing, at which he announced that his company had begun mass production of face masks.

The Chaska, Minnesota-based pillow giant has retooled 75% of its production toward making face masks to help curb the spread of the disease. It has been making 10,000 cotton masks per day since the end of March, but it plans to significantly increase production by the first weekend of April.

MyPillow is enabling the jump in production by operating two shifts a day and calling on its production partners, who make supplies like mattress toppers for them, to also begin making face masks.

Lindell invented MyPillow in 2004 and began a small operation selling his product at “fairs, home shows, and expos,” as stated on the MyPillow website. Since then, Lindell’s privately owned company has sold 47 million pillows.

When it became clear that the coronavirus was a serious threat to America, Lindell called the White House to inquire how he could help.

“I called the administration,” Lindell said, “ … and they directed me to [the director of the Office of Trade and Manufacturing Policy], Peter Navarro.” Navarro is also the national Defense Production Act policy coordinator.

They already had a coalition setup for this and a task force. They were really helpful, saying what was needed, what the specs were for the masks, and what we could make. In three days, we completely turned our factory [to produce face masks].

With the high demand for face masks, Lindell says, “we are shipping them out as fast as we are making them.”

“One of my home towns in Minnesota, one of the counties, Martin County, they reached out [March 31], and they are the highest per capita in Minnesota that have the virus,” he said. “We drove [masks] down there. We drove masks to the hospitals and the doctors that reached out.”

Altruistic efforts are nothing new for MyPillow.

“It’s what I do at MyPillow. When we had the hurricanes—Hurricane Harvey—we gave 80,000 pillows down there. We gave [during] the Camp Fire in California,” he said. “This [pandemic] is bigger than anything we have ever faced. The president reached out for everyone to get involved and do what they could.”

Lindell’s respect for President Donald Trump was made clear during the White House task force briefing on Monday, when he asked Trump if he could read something “off the cuff.”

Lindell went on to say that the president brought hope back to America. “With our great president, vice president and this administration, and all the great people in this country praying daily, we will get through this and get back to a place that’s stronger and safer than ever,” he said.

The pillow CEO further expressed his confidence in the president’s leadership. “He is a master of problem solution … . I believe God works through him, and He has given him an amazing gift to lead the most powerful country in the world,” Lindell said, adding that he is optimistic about the country’s future:

We are the greatest nation in the world … anything that hits us, with God all things are possible, and we get through by the grace of God.