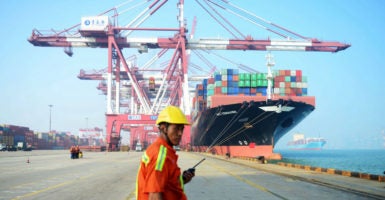 From January to February, the monthly trade in goods with China decreased $10.9 billion—mostly from a decline in imports from China. Pictured: A Chinese worker looks on as a cargo ship is loaded at a port in Qingdao, eastern China's Shandong province, July 13, 2017. (Photo: STR/AFP/Getty Images)

It’s sometimes said that China is the world’s manufacturer, but the U.S. is the world’s consumer. When there’s less trade happening between these two giants, it’s not good for either one. Neither are the tariffs on that trade.

It’s been a little over two months since China began shutting down its domestic economic activity (restricting travel, closing movie theaters, limiting factory workers, etc.) to curb the spread of the coronavirus.

New U.S. statistics show the negative effects the coronavirus is having on U.S.-China trade, now that both the supply and demand for globally traded goods have taken a hit with the U.S. significantly slowing its own economic activities.

From January to February, the monthly trade in goods with China decreased $10.9 billion—mostly from a decline in imports from China.

Not all trade with China saw a decrease. There was increased trade in sorghum, palladium (a metal used in catalytic converters for cars and dental implants), magnesia (a chemical sometimes used in antacids), integrated circuits, and medical diagnostic parts.

But including trade with China, U.S. total trade with the world was $15 billion less in February than January. U.S. trade in services decreased $3.1 billion, with the biggest decreases in travel and tourism. A decrease in both imports and exports is worrisome.

Some in Washington would like to see a further decline in trade, but that is unlikely. Americans will continue to benefit by trading hundreds of billions worth of goods every month—including with China.

But decreasing imports and exports suggests troubling economic times ahead.

The Cost of Tariffs

Since coming into office, the Trump administration has waged a trade war with China that has resulted in hundreds of billions worth of traded goods seeing higher tariffs.

This has meant an additional $48 billion tax on American consumers and a disruption to U.S supply chains. There have been new tariffs on other imports as well.

A Phase One deal to wind down the U.S.-China trade war was reached in early January, just as the coronavirus took hold in China. At that time, there were punitive tariffs on medical supplies and various chemicals.

The Trump administration has since granted more medical supply importers exemptions from these tariffs.

There were reports the Trump administration could pause the collection of certain tariffs for 90 days to allow businesses to focus on production of essential goods, but President Donald Trump has denied these reports.

A Snapshot of US-China Trade

China’s domestic economy continues to struggle to recover from the effects of the coronavirus. And so long as it’s biggest customers are slowing economic activity, China’s economy won’t return to normal.

In the first two months of the year, large enterprises in China saw a 40% decrease in profits. One estimate suggests China’s economy could contract by 10% in the first quarter (the months of January, February, and March).

It wouldn’t be surprising to see U.S.-China trade (as well as U.S. total trade with the world), continue to decline over the next month.