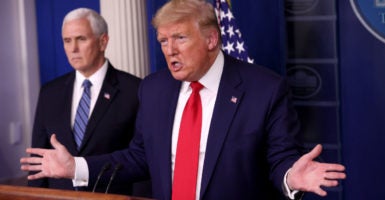 President Donald Trump said he wouldn’t be wearing a face mask to slow the spread of the new coronavirus even as he announced the Centers for Disease Control and Prevention is now suggesting Americans do so.

“I’m feeling good. I don’t know. Somehow sitting in the Oval Office behind that beautiful Resolute Desk, the great Resolute Desk, I think wearing a face mask as I greet presidents, prime ministers, dictators, kings, queens, I don’t see it for myself,” the president said Friday evening during the daily White House briefing.

“Maybe I’ll change my mind. This will pass and hopefully, it will pass quickly,” Trump added. “That being said, if someone wants to, most people could just make something. So it’s very simple to do. I won’t be doing it personally. It’s a recommendation.”

Trump also announced that the federal government would be covering the cost of uninsured Americans who get tested and treated for COVID-19, the disease caused by the coronavirus.

And, responding to a question, the president said he believed the Nov. 3 election should go forward with in-person voting at booths and with voter ID.

Surgeon General Jerome Adams explained why most public health organizations and professionals in the United States and globally have done an about-face on wearing masks.

“We have always recommended that symptomatic people wear a mask, because if you’re coughing, if you have a fever if you are symptomatic, you could transmit the disease to other people,” Adams said, adding:

What has changed in our recommendation? It’s important to know that we now know from recent studies that a significant portion of individuals with coronavirus lack symptoms. They’re what we call asymptomatic. Even those who eventually become presymptomatic, meaning that they will develop symptoms in the future, can transmit the virus to others before they show symptoms.

In light of this new evidence, CDC recommends, and the task force recommends, wearing cloth face coverings in public where other social distancing measures are difficult to maintain. These include places like grocery stores and pharmacies.

Trump tried to assure uninsured Americans they will be covered if they seek treatment.

“I can so proudly announce that hospitals and health care providers treating uninsured coronavirus patients will be reimbursed by the federal government using funds from the economic relief package passed last month,” Trump said. “This should alleviate any concern uninsured Americans may have about seeking the coronavirus treatment.”

“Under the president’s direction, we will use a portion of that funding to cover provider’s costs for delivering COVID-19 care for the uninsured, sending the money to providers through the same mechanism used for testing,” Azar said. “As a condition of receiving funds under this program, providers will be forbidden from balance-billing the uninsured for the cost of their care. Providers will be reimbursed at Medicare rates.”

Trump later took a question about the November election, and expressed his opposition to going to all mail-in ballots.

“The general election will happen on Nov. 3,” Trump said, adding:

I think a lot of people cheat with mail-in voting. I think people should vote with ID, voter ID. I think voter ID is very important. The reason they don’t want voter ID is because they intend to cheat. When you get something, when you buy something, you look at your cards and credit cards. You have your picture on many of them, not all of them, but many of them. You should have a picture for voting. It should be called voter ID. It shouldn’t be mail-in voting.

It should be you go to a booth and you proudly display yourself. You don’t send it in the mail where people pick up. All sorts of bad things can happen by the time they sign that, if they sign that. By the time it gets in and is tabulated–no, it shouldn’t be mailed in. You should vote at the booth and you should have voter ID.