This Is Xi’s Virus. The Chinese Ought to Pay for It. 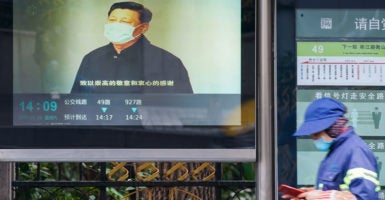 As a result of Chinese President Xi Jinping’s duplicity, Americans are racing to catch up with the the spread of the virus, Rep. Mark Green writes. Pictured: A screen at a bus stop in Shanghai, China, on Feb. 29 shows a clip of Xi wearing a protective mask as the coronavirus spread in mainland China. (Photo: Yifan Ding/Getty Images)

After passing a record $2.2 trillion bill last week to aid millions of Americans who lost their livelihoods as a result of the coronavirus, Congress already is talking about another spending bill.

Rather than pouring out another bundle of billions at tremendous cost to the American taxpayer, we should be cashing a check from the responsible party. China should pay for the effects of the new coronavirus that they let spread unchecked while trying to cover up their tracks and lying to the world.

COVID-19, the disease caused by the new coronavirus, continues to sweep across the world, taking thousands of lives and smashing the global economy. Despite their best efforts, even the liberal media can’t blame President Donald Trump for this one.

The contagious virus originated in China, and the Chinese Communist Party hid it from the world for weeks, allowing it to spread undetected into thousands of tourist sites across the world and into American cities. As a result, a record number of Americans now are unemployed as businesses across the country come to a screeching halt.

About 206,200 Americans had confirmed cases of COVID-19 by Wednesday and at least 3,685 had died, according to Johns Hopkins University School of Medicine’s Coronavirus Resource Center. LiveScience reported that the virus had infected at least 211,413 Americans and killed 4,713 as of Wednesday evening.

Though Trump responded firmly Jan. 31 by shutting off travel to and from China, the coronavirus already had spread far beyond our control. As a result of Chinese President Xi Jinping’s duplicity, Americans are racing to catch up with the the spread of the virus.

Congress appropriated $8.3 billion in early March, the president authorized another $50 billion when he declared a national emergency, and then Congress voted to spend another $2.2 trillion just last Friday.

That’s not counting the cost of the so-called Families First Coronavirus Response Act, passed March 18, for which we still don’t even have a reliable estimate.

Why should the injured party foot the bill?

If you have a mortgage and a savings account at the same bank and you don’t pay your mortgage, the bank takes your savings account to repay the debt. It’s not so different today.

China has invested $1.7 billion in U.S. treasury bills. Now, they’ve incurred a debt to us because of what they have done—or rather, what they have failed to do—with this virus. America should withhold payment on our debt interest to China until Xi’s virus liability is paid for.

In spreading this virus, though, China hasn’t just left one mortgage unpaid. It has turned tail on its mortgage with every nation in the world that is affected by this virus.

And although we call ourselves the leaders of the free world, we have stood by and watched.

We’ve watched the Chinese lie to our faces about the number of infected patients and deaths in their own nation, after the communist government kicked out American journalists.

We’ve sat still as a Chinese Foreign Ministry official made the absurd and despicable claim that our brave soldiers are responsible for the virus that originated in Wuhan, the capital of China’s Hubei province.

When all is said and done, we very well may have spent more than the annual U.S. budget in our own money to help stop this virus that Xi concealed.

This is the Chinese Communist Party’s virus. This is Xi’s virus. And he ought to pay for it.