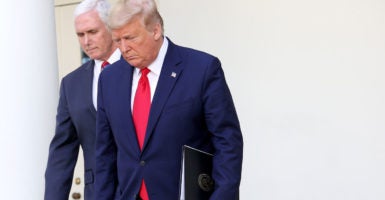 The idea that some American and European news outlets are giving more credibility to the Chinese party line on the coronavirus than they do to their own governments is nothing less than bizarre. Yet, here we are.

Even in this time of national crisis, sheer hatred for the U.S. president causes many in the mainstream media to interpret his every action and statement as unacceptable.

On top of that, Beijing for years has been constructing the grid for information warfare against the United States, which it now is deploying full force. This combination has produced a shameful capitulation by the media establishment to China’s communist authoritarian regime.

This has been reflected in decisions by news outlets such as CNN, NBC, CBS, and ABC to cut away from President Donald Trump’s daily coronavirus briefings at the White House.

Ted Koppel, whose classic “Nightline” show was born out of the Iran hostage crisis in 1979, and who now is back on the air, has commented that statements by Trump that are unfiltered by journalists are not newsworthy.

Day after day, media pundits blast and malign Trump. Meanwhile, networks carry the daily briefings by New York Gov. Andrew Cuomo, a liberal Democrat, as if only the news from New York counts.

Not only that, but according to the Media Research Center, the same news media that continuously piles on Trump fails almost entirely to shine a critical light on the actions of the Chinese government.

In a damning report looking at evening news broadcasts from Jan. 17 (when the first coronavirus story broke) through March 13 (when the president declared a national state of emergency), the Media Research Center found that out of 634 minutes of coronavirus coverage, just 3 minutes and 14 seconds were in any way critical of the Chinese government’s actions.

In 20% of the stories, reporters cited Chinese statistics, but failed to challenge them most of the time (97%).

Over the past decade, Beijing has invested heavily in extending its propaganda reach across the globe, which now is paying off.

Major newspapers such as The Washington Post and the Financial Times carry paid “country advertising” supplements, paid for by China and other countries practicing public relations. These supplements are nice moneymakers for the news organizations and almost indistinguishable from regular news pages.

In some cases, the arrangement goes even further. According to an investigation by the Daily Caller, the Daily Mail newspaper in London has had a content-sharing relationship since 2015 with China’s People’s Daily, the official organ of the Chinese Communist Party.

The Daily Mail thus can be found to echo the Communist Party line on the COVID-19, which originated in China.

Last week, the Mail ran a story about a second outbreak in China, saying: “Beijing’s leading doctor warns of a NEW [MK1] coronavirus outbreak in China after the country reported its first case of someone ‘catching the illness from a person returning from abroad.’”

This story got 1.1 million shares on social media. Countries singled out by it are the United States, Italy, and the United Kingdom.

The storyline is that the United States, not China, is responsible for the coronavirus emerged in March as a propaganda tactic by Beijing. On March 13, People’s Daily published a story based on statements by Chinese Foreign Ministry spokesperson Zhao Lijian alleging that a visit by U.S. military athletes to Wuhan in October spread the coronavirus in China.

“U.S. is the creator of human right [sic] disasters” reads a March 23 article on the People’s Daily website.

China’s information war goes hand in hand with a bid for greater global influence. Although this is unconscionable, it’s not hard to grasp the motivation of the leadership in Beijing.

What is much harder to comprehend is the readiness of the mainstream media to give Beijing a pass—all the while showing irrational disdain for the heroic efforts of America’s president and his administration.