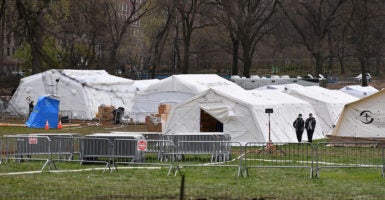 Dan Lips is a Senior Policy Analyst at The Heritage Foundation, where he researches and writes on federal and state education issues.

Coming soon to a parking lot near you—a hospital. Federal and state officials are rushing to create temporary medical centers to help patients during the pandemic.

The White House recently announced that the federal government will partner with state and local governments to increase hospital capacity. One method is by directing the Army Corps of Engineers to construct temporary field hospitals.

The goal is to help hospitals in virus hot spots such as New York City and Seattle that are reportedly overflowing. Hospital staff in Florida are preparing for a surge in the coming weeks. Louisiana is preparing by placing more than a thousand beds in a New Orleans convention center.

And as more people are tested and determine they may be infected, many will be heading to the emergency room.

A recent study by Johns Hopkins University warned that the United States has fewer than 100,000 ICU beds. Between 200,000 and 2.9 million people may require such care, depending on the pandemic’s severity and duration.

The public and private sectors will need to be creative to increase medical capacity, as demonstrated by efforts to turn convention centers and other public spaces into makeshift hospitals.

For years, federal auditors have said that federal property management is a “high risk area” because of the surplus facilities that Washington owns—and stands empty. But this past management presents an opportunity today.

As of 2015, the Government Accountability Office reported that federal agencies had 7,000 surplus facilities and were struggling to keep track of their properties, which means that the amount of physical capital may be even larger.

The General Services Administration and the Department of Health and Human Services have significant discretion to transfer, sell, or lease properties already—particularly to help improve public health needs.

Now is the right moment for GSA and HHS to turn unused buildings over to state and local officials or even private hospitals for use during the pandemic.

A good place to start is by reviewing potential options. According to GSA data analyzed in a recent Mercatus Center report, federal agencies reported that 34 hospital buildings, 140 dormitories/barrack buildings, and 827 family housing units were “unutilized” as of fiscal 2018.

State and local leaders should examine GSA data and see if any “unutilized” or “underutilized” properties would meet their current needs.

At the same time, state and local leaders should review their own unused properties that might be repurposed, including vacant public school buildings. Not the schools that are temporarily closed because of COVID-19, but buildings that have sat empty for years as enrollment levels in traditional districts have changed.

Pew Center research finds that urban districts around the country have a surplus of empty buildings. As of 2013, Detroit had 124 school properties on the market (at least 29 buildings are closed today), Cleveland and Kansas City had 26, and Chicago had 24. Philadelphia closed some 30 schools between 2010 and 2015, and reports indicate some of these sites remain empty.

In Oklahoma City, Oklahoma’s largest school district, one-third of all instructional space is currently unused. The Tucson, Arizona, school district has closed 20 schools over the last decade. Some of these buildings are now being held for “future use” or have no development planned.

In Arizona, lawmakers have adopted proposals that try to expedite district efforts to sell or lease school district facilities. In South Carolina, lawmakers already give charter schools the chance to bid on vacant district properties.

State lawmakers should move quickly to revise ideas such as these and put empty school buildings to use immediately for medical needs.

The coronavirus pandemic requires the public- and private-sector leaders to think creatively about how to address our current challenges. Repurposing unused public buildings for current public health needs is a great example of how the public and private sectors can work together during a crisis.