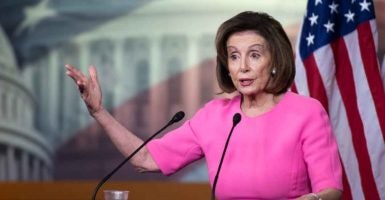 Speaker of the House Nancy Pelosi, D-Calif., speaks during her weekly news conference in the Capitol on March 26, 2020. (Photo: Caroline Brehman/CQ-Roll Call/Getty Images)

The  coronavirus aid package is expected to be voted on by the House Friday, after the Senate passed the bill late Wednesday.

“Congressional Democrats in the Senate, and in the House, were able to flip this over from corporate trickle-down Republican version, to bubble-up for families first legislation,” House Speaker Nancy Pelosi, D-Calif., said Thursday. “We have some other things we want to do, but first we want to take pride in what happens there.”

Paul Winfree, director of the Roe Institute for Economic Policy Studies at The Heritage Foundation, said the CARES Act “will cripple the economy by pushing people away from their employers and onto unemployment insurance” in a statement released Wednesday.

“This will ultimately hurt workers who will be better off remaining attached to their jobs so that when the pandemic subsides we can all get back to work as quickly as possible,” Winfree said, adding:

The primary goal of policymakers should be to keep Americans attached to their employers, not government programs. The current unemployment insurance provision in the CARES Act works directly against that goal. Heritage scholars have offered an alternative to keep workers connected to employers, provide stability for businesses caught in this uncertainty, and mitigate the overall economic effects of this crisis.

The CARES Act passed in the Senate after several days of tense negotiations between Republican and Democrat lawmakers. The legislation, which required the votes of 60 senators to advance, only received 49 yes votes Monday and 47 on Sunday.

House Minority Leader Kevin McCarthy was critical of Democrats’ demands Thursday, saying during a press conference: “How many people were laid off as the Democrats fought to change the election law or implement the Green New Deal?”

Republicans said Democrats were asking for green policies, such as tax credits for solar and wind energy initiatives; and tougher fuel emission standards, to be included in the legislation. No such measures made  it into the final legislation.

President Donald Trump is expected to sign the coronavirus aid legislation after the House passes it. On Thursday, Trump tweeted,  “96-0 in the United States Senate. Congratulations AMERICA!”

On Twitter, Rep. Alexandria Ocasio-Cortez complained that the bill does not do enough for immigrants.

“To clarify, $1200 checks are ONLY going to some w/social sec numbers, NOT immigrants w/ tax IDs (ITINs),” Ocasio-Cortez, D-N.Y., tweeted. “Thanks to GOP, these checks will be cut off the backs of *taxpaying immigrants,* who get nothing. Many are essential workers who pay more taxes than Amazon.”

Rep. Mark Walker, R-N.C., said that after Congress passes relief for Americans and business, it needs to get serious about the country’s financial status.

“Once we make sure our families, health care workers and small businesses have the resources needed, it’s time to fix our future,” Walker tweeted. “I would like to see if Washington can social distance itself from reckless spending for awhile.”