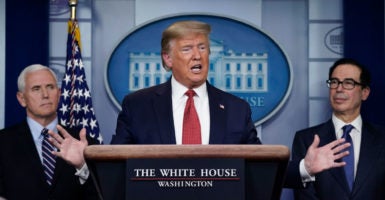 The 15 days that President Trump, shown during the coronavirus briefing on March 25, has asked for is an entirely appropriate interval to gauge the American response to COVID-19.(Photo: Drew Angerer/Getty Images))

On March 16, President Donald Trump announced a new initiative, “15 Days to Slow the Spread,” to halt or hinder the rapid spread of COVID-19.

Earlier this week, he tweeted the following: “WE CANNOT LET THE CURE BE WORSE THAN THE PROBLEM ITSELF. AT THE END OF THE 15 DAY PERIOD, WE WILL MAKE A DECISION AS TO WHICH WAY WE WANT TO GO!”

In remarks on Wednesday, Trump further clarified his expectations:

But our decision will be based on hard facts and data as to the opening.  I’m also hopeful to have Americans working again by that Easter—that beautiful Easter day.  But rest assured, every decision we make is grounded solely on the health, safety, and well-being of our citizens.

On Day Nine of 15, are we near an end to the widespread lockdown orders in place in almost all 50 states?

The president’s promise is narrow: that his administration will reevaluate the situation and make an informed decision based on the available evidence. Unfortunately, the current available data does not suggest that global ordeal is near an end for Americans.

According to Worldometer, in the past 24 hours, the United States added 9,909 new confirmed cases and lost 130 patients to the virus. The rate of new cases is increasing at an extreme rate, but this could be confounded by the vast expansion of testing capacity in America over the past two weeks.

A less confounded but more morbid metric is the number of daily deaths, which have also increased in rate over the past three days. There was a slight respite between Mar. 19 and Mar. 21 when the number of new deaths decreased from 56 to 46, but by Mar. 22, the number jumped up to 113. On Mar. 24, we lost 225 patients to the virus.

This is just as the U.S. surgeon general, Dr. Jerome Adams, predicted: “Things are going to get worse before they get better.”

Still, this does not mean that progress isn’t being made.

According to a study from Johns Hopkins University, the median incubation period for COVID-19 is 5.1 days, which means half of people who develop symptoms of COVID-19 will do so in about five days.

The same study found that 97.5% of people who develop symptoms will develop symptoms in 11.5 days after being exposed. Because of this relatively long incubation period, improvements in the metrics will lag public health efforts by one to two weeks.

That means that if everything has gone perfectly since Trump asked Americans to help slow the spread, there are still two and a half more days for most people who were exposed to the virus to develop symptoms. If all has gone to plan, the numbers will start to look better after that and no sooner.

We know that nothing goes exactly to plan, and Americans have not necessarily been in compliance with social distancing, so it remains to be seen if we will see any real improvements.

That said, most governors have implemented strict rules affecting the majority of Americans in an effort to stop the spread of COVID-19.

If most of us have been practicing proper social distancing and quarantining as needed, there is a good chance that in several days, we will see an improvement in the trajectory of some of the numbers.

Thus, the 15 days that Trump has asked for is an entirely appropriate interval to gauge the American response to COVID-19.

The president and his team are likely to be paying close attention to the rate of growth in cases.

At the current rate, the number of confirmed cases doubles every three days. Right now, that is obviously too high a number to relax viral mitigation and suppression strategies.

If the growth rate in cases begins to level off, we may consider relaxing certain measures, but life will likely not start returning to normal until numbers of active cases start decreasing.

The next few days will give us a tremendous amount of data to help determine next steps for the country. There may be good news soon if the president’s 15 days proved effective, but Americans should be prepared to hunker down a little longer if the virus’ rampage has not been checked.