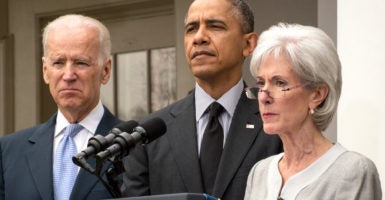 The federal government knew about a shortage of protective masks going back to 2009, after the H1N1 virus, but didn’t replenish its supply for the next pandemic, which arrived this year with the highly contagious coronavirus.

Afterward, an H1N1 task force recommended that the Obama administration replace the masks in the national stockpile, according to reporting by the Los Angeles Times and Bloomberg News.

“If the Obama administration didn’t respond to a request for additional masks, and if they did not communicate that need to the incoming [Trump] administration, that would certainly make the present situation more difficult,” Amy Anderson, a registered nurse and co-founder of the Global Nurse Consultants Alliance, told The Daily Signal in a phone interview.

Both the Obama and Trump administrations had adequate time to respond to the task force recommendation before the coronavirus outbreak, said Dr. Lee Gross, who practices family medicine in North Port, Florida, and is president of Docs 4 Patient Care, a national health care advocacy group.

“Certainly the number of depleted masks were not replaced, and we should know why. It’s been a problem across multiple administrations,” Gross told The Daily Signal in a phone interview.

The N95 masks have a shelf life of five years, according to the Centers for Disease Control and Prevention, so continuous replacements are necessary.

N95 masks, which fit tightly, are designed to prevent particles in the air from entering the nose or mouth. Regular surgical masks are designed to protect physicians and other medical providers from fluids. The “95” means the masks are approved by the Food and Drug Administration to filter out 95% of particulates.

“One thing about natural disasters is there is a set time where you are expected to be able to provide self-care, usually about 72 hours in a hurricane, before the federal government responds,” Gross said. “The same is true in a pandemic for supplies. Hospitals should have personal protective equipment. The fact that we haven’t demonstrates a flaw in the system.”

Although medical supplies on hand weren’t adequate to respond to the coronavirus, Gross said, it is “unprecedented” territory when “a disease can spread when a carrier doesn’t know they have it.”

It’s not just masks, the physician said. In his own office, he said, he has enough N95 masks and enough tests, but has been unable to get more medical gowns.

The Department of Health and Human Services announced earlier this month that it was ordering 500 million additional masks over the next 18 months.

HHS Secretary Alex Azar testified to Congress in February that the federal stockpile had 12 million of the N95 masks and 30 million surgical masks in all.

President Donald Trump’s full invoking of the Defense Production Act would be an important step since it allows him to order companies to produce more supplies, noted Anderson, an assistant professor at the School of Nursing and School of Medicine at Texas Christian University.

But Anderson said she also hopes there is a way to ensure that U.S. manufacturers are producing masks and other equipment for U.S. health care providers before selling abroad.

The CDC didn’t immediately respond Wednesday to a request for comment for this report.

Sen. Tammy Duckworth, D-Ill., is among many Democrats who criticized Trump for not acting quickly enough on the mask shortage.

“I continue to call on the Trump Administration to go much further in using the #DefenseProductionActNOW to order 300 million #N95 respirators & as many ventilators as we can produce,” Duckworth tweeted. “The time Trump wasted is a sunk cost. My focus is pushing him to act NOW.”

However, former House Speaker Newt Gingrich, a Trump supporter, blamed the Obama administration for the shortage, tweeting: “Experts advised replacing them but Obama-Biden team failed to buy them. Shortage starts with them.”

Bloomberg News first reported March 13 that hospitals are getting only about 44% of the N95 masks they need and that doctors are putting the masks in bleach so they can reuse them.

The national stockpile used to be somewhat more robust. In 2006, Congress provided supplemental funds to add 104 million N95 masks and 52 million surgical masks in an effort to prepare for a flu pandemic. But after the H1N1 influenza outbreak in 2009, which triggered a nationwide shortage of masks and caused a 2-to-3-year backlog orders for the N95 variety, the stockpile distributed about three-quarters of its inventory and didn’t build back the supply.

The Los Angeles Times reported March 20 that the U.S. government ignored warnings in 2009, making no reference to Obama’s being president at the time.

The CDC, under the George W. Bush administration, published a “National Strategy for Pandemic Influenza” in 2005. In that case, the government heeded the agency’s advice to stockpile medical supplies.

After the swine flu epidemic in 2009, a safety-equipment industry association and a federally sponsored task force both recommended that depleted supplies of N95 respirator masks, which filter out airborne particles, be replenished by the stockpile, which is maintained by the U.S. Department of Health and Human Services.

The International Safety Equipment Association and the federal H1N1 task force recommended replacing the N95 masks after the response to the swine flu drew down 100 million masks from the federal stockpile, the paper reported.

However, association President Charles Johnson told the Times: “Our association is unaware of any major effort to restore the stockpile to cover that drawdown.”