China Ignores Lessons of the Ebola Outbreak and the World Pays 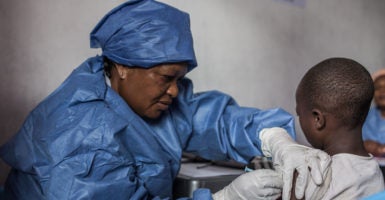 Delays in warning the world of the 2013 Ebola outbreak that shook West Africa contributed to the far-flung, destructive spread of that disease. Pictured: A girl gets inoculated with an Ebola vaccine Nov. 22, 2019, in the eastern Democratic Republic of the Congo's Goma. (Photo: Pamela Tulizo/ AFP/Getty Images)

Alexander St. Leger is a member of the Young Leaders Program at The Heritage Foundation.

There are no exact corollaries in history to the coronavirus pandemic gripping the world now. But the response to the disease known as COVID-19 does contain the echo of a mistake that exacerbated the spread of a recent, deadly epidemic.

The first case of the West African Ebola outbreak was recorded in Guinea in December 2013. It jumped quickly to neighboring Sierra Leone and Liberia, creating a full-fledged epidemic. Those three countries suffered the most, but seven other countries, including the U.S., had cases before the epidemic was contained.

COVID-19 originated in Wuhan, China, in November or December 2019. Less than four months after it was reported in China, the virus is now attacking most of the world’s countries. The quick spread suggests COVID-19 is more contagious than Ebola, though there are still too many unknowns around this new virus to be sure.

Fortunately, it is not as lethal. Estimates of its mortality rate range from 0.25% to 3%, making it much less deadly than Ebola, which has a staggering 50% mortality rate. COVID-19, like Ebola, likely passed from a bat or other wildlife to “patient zero.”

The two diseases have many differences, but the responses have several unfortunate commonalities. The Ebola epidemic initially thwarted containment in part because the affected countries failed, or lacked the capacity, to quickly report the outbreak. Fifteen weeks passed from the time Ebola claimed its first victim until a Guinean doctor raised the alarm.

Beijing may never give a straight answer about the timing and origins of COVID-19, but it is clear that the Chinese authorities not only dallied in warning the world of the new hazard, but they suppressed information from Wuhan.

Effectively battling an epidemic requires, as a Heritage Foundation report on the Ebola outbreak explained, “a quick and comprehensive response … Every day that passes before the response is launched heightens the potential loss of life.”

That is especially true for a contagious virus such as COVID-19; a recent study found that if China had launched its interventions three weeks earlier, there likely would have been 95% fewer COVID-19 cases. Beijing’s delay in sounding the alarm virtually ensured the virus would spread beyond its borders and robbed the world of precious time to marshal a response.

The Chinese government’s foot-dragging is particularly unconscionable because it knows better. China provided some medical support to the West Africa Ebola outbreak, so it is familiar with the reporting failures that allowed Ebola to spread so widely. Beijing also has been caught masking the 2003 outbreak of severe acute respiratory syndrome (SARS), an infectious disease similar to COVID-19.

Finally, Beijing is a signatory to the International Health Regulations, which commits participating parties to, within 24 hours of discovery, notify the World Health Organization of any health emergencies that may have international impact. Beijing ignored its obligations when COVID-19 erupted.

The defensiveness and secrecy with which the Chinese Communist Party, the supreme, authoritarian power in China, responded to COVID-19 is consistent with its values. It hoards power because it believes that it knows what is best for its citizens, better than they do themselves.

In such a system, it is unnecessary, and even dangerous, to be transparent with its people. So when COVID-19 emerged (and SARS before that), the party instinctively responded with a cover-up that concealed what was happening from its own people and the world.

This is a different outbreak and under different circumstances than we have ever had before. But history’s lessons still apply.

If the Chinese Communist Party had heeded the warnings of the West Africa Ebola outbreak, the world would be a far less dangerous place right now.