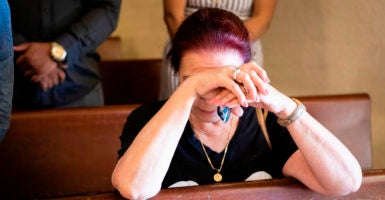 The principles of faith and freedom will see us through as a nation with such diversity among the states. Pictured: A woman prays during Sunday Mass at Santuario Nacional de Nuestra Señor de la Caridad Church in Miami March 15. (Photo: Eva Marie Uzcategui/AFP/Getty Images)

The coronavirus crisis presents challenges to us as a nation and as individuals. There are principles we should keep in mind.

Let’s remember how our nation works. We have a Constitution that assigns limited, defined powers to the federal government and leaves the rest to the states and individuals.

Some governors, like J.B. Pritzker of Illinois, don’t seem to understand this. At a time when political leaders should be inspiring confidence, Pritzker is attacking President Donald Trump, accusing the federal government of being “completely unprepared.” He wants to lay blame for crowds and delays at O’Hare Airport on the president.

Trump acted with deliberation, doing his job, shutting down flights from China and then Europe. As Americans massed back to their home country, airports were predictably backed up.

O’Hare Airport is owned and operated by the city of Chicago. Clearly, some functions there, such as customs, are federal functions. But overall operation of the airport is local, and rather than jumping on the president and playing blame games at a difficult time, governors such as Pritzker should step up to do their part.

One reason Italy has been hit hard is it has the oldest population in Europe, with 23% over the age of 65.

In the U.S., there are large age variations among the states.

How can “one size fits all” work with such dramatically different local realities?

The answer is that we should maximize local responsibility and decision-making.

There are two other critically important things to keep in mind.

It’s why socialism and illusions about national planning are so bogus and always result in failure. And why freedom is so critical and important.

Only through freedom is responsibility focused where it needs to be: on individuals. And freedom delivers maximum flexibility and creativity to deal with life’s inherent surprises.

This health crisis is precipitating an economic crisis. With all eyes turning toward Washington, our business leaders must step up and take responsibility.

I’ve been writing for years about my belief in free economy and the importance of earning a profit.

With almost 50% of our youth now expressing misguided enthusiasm for socialism, it is critical that business leaders behave thoughtfully and humanely in this crisis. The future of our free, capitalist system rides on it.

Clearly, there is a place for government in keeping the economy moving and helping individuals in distress. But business leaders should not just look to government.

In areas such as sick leave, business leaders should pick up the brunt.

They should not forget that the same God that made employers made workers.

Faith will play a key role in helping our nation through this crisis and emerge better for it.