Coronavirus Is the Chinese Government’s Curse Upon the World 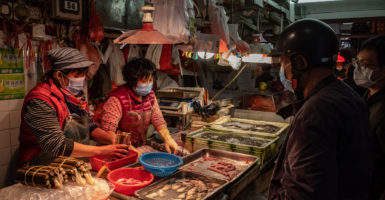 "If the Chinese government spent as much time working on educating its people and regulating dangerous markets as it does on secrecy and propaganda efforts, maybe it wouldn’t have to worry as much about diseases being named after it," David Harsanyi writes. Pictured: Residents purchase seafood at a wet market Jan. 28, 2020, in Macau, China. (Photo: Anthony Kwan/ Stringer/Getty Images)

The World Health Organization and other sensitive souls have instructed us to stop referring to the new strain of the coronavirus as the “Wuhan” or “Chinese” flu because of the racist connotations.

I’m disinclined to curb my speech to placate Chinese propagandists, and it seems to me the aversion to those terms is less about racism than about averting blame. But in the spirit of comity, and avoiding disparaging an entire nation, I’m happy to call it the ChiCom Flu moving forward.

There are many traditional naming conventions that don’t really make that much sense. Somewhat weirdly, for example, we often name diseases after the people who “discover” them—Hodgkin’s disease after Thomas Hodgkin, Parkinson’s disease after James Parkinson, and so on.

But naming viral diseases after places—Guinea worm, West Nile virus, Ebola, Rocky Mountain spotted fever, etc.—is probably just intuitive. Viruses “come” from someplace, after all, and thus people gravitate to those names. I doubt we came up with “Lyme disease” because of some deep enmity toward Connecticut.

The latter was, until very recently, widely referred to as the “Spanish flu,” a virus that killed around 675,000 Americans and tens of millions of others around the world in the early 1900s.

“Spanish flu” has now retroactively fallen into disfavor as well. And to be fair, there is some historical evidence that the virus may actually have originated in China or France, so if we must call it the French flu moving forward, so be it.

But while the Spanish have a good case to be annoyed, the Chinese government does not.

Early on, the communists destroyed samples and suppressed vital information that could have helped mitigate the damage of this new strain of the coronavirus.

The government also silenced doctors who warned about the disease. Some were censured for “spreading rumors” or sharing test results with colleagues, and some were forced to write self-critical public letters—a Marxist mainstay—admitting that the warning “had a negative impact.”

The Chinese communists, like all communists, hide societal problems. There is no crime, disease, or addiction in the collectivist state. This kind of secrecy and dishonesty can be disastrous, especially in a highly interconnected world.

Though millions of Chinese have been lifted out of extreme poverty through free trade, with modernity comes some basic responsibilities—for instance, not killing everyone in the world with preventable zoonotic diseases.

The Chinese regime is perfectly capable of administering an array of authoritarian policies to suppress the rights of its own people. But it’s apparently unable to exert even mild cultural pressure warning them that their eating habits can be extraordinarily dangerous and hold the potential of creating massive socioeconomic problems.

If reports are correct, it was in Wuhan’s popular “wet markets” that vendors were selling the bats—and possibly snakes—that may have caused the COVID-19 outbreak. “Wet” because the meat sold in its unsanitary stalls was only recently slaughtered.

This kind of thing happens quite often. And not always in China, of course. But the avian influenza was likely transmitted to humans from chickens in a “wet” market.

Scientists have been warning for years that the eating of exotic animals in southern China “is a time bomb.” Acute respiratory syndrome (SARS) also originated in China, and probably jumped to humans through bats. Other coronavirus strains are also likely connected to bats.

I hate to thrust my Western cultural values on anyone, but maybe it’s time to stop eating bats.

It’s important to stress that it’s not the Chinese people who are the problem. Just look at their success in Taiwan, Hong Kong, Singapore, and the United States. The ChiComs are the problem.

If the Chinese government spent as much time working on educating its people and regulating dangerous markets as it does on secrecy and propaganda efforts, maybe it wouldn’t have to worry as much about diseases being named after it—or about the catastrophic death and economic pain their negligence helps cause.