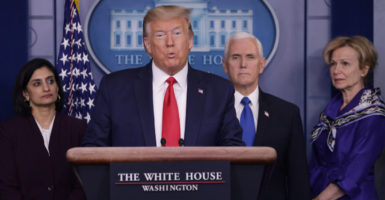 President Donald Trump indicated during the press briefing Wednesday that authorities granted in the Defense Production Act would be used to increase production of in-demand medical equipment, including ventilators and masks. (Photo: Alex Wong/Getty Images)

In a White House press briefing Wednesday, President Donald Trump said that he was invoking the Defense Production Act in the event he needed to use the authorities granted in the federal statute to fight what he is now calling a “war” on COVID-19.

The president indicated during the press briefing that authorities granted in the act would be used to increase production of in-demand medical equipment, including ventilators and masks.

His administration has production targets for key pieces of equipment to fight COVID-19, the new coronavirus disease, and Vice President Mike Pence said industry leaders are “ready to step in” and add to our supply of these items.

The Defense Production Act of 1950, as amended, is a federal statute, passed during  the the Korean War. According to a short primer by the Congressional Research Service, it confers “upon the President a broad set of authorities to influence domestic industry in the interest of national defense. The authorities can be used across the federal government to shape the domestic industrial base so that, when called upon, it is capable of providing essential materials and goods needed for the national defense.”

It seems likely to us that the president will need to use the authorities under the statute in the coming weeks and months, whether that’s to allocate raw materials among manufacturers, prioritize government contracts, or limit distribution only to permitted buyers. For the time being, we wanted to answer some basic questions about the statute.

Although it was originally designed to help with our national defense, Congress has expanded the phrase “national defense” in the statute over the years, and it now covers natural disasters, terrorist attacks, and other national emergencies.

The statute, according to the Congressional Research Service, may be used to “enhance and support domestic preparedness, response, and recovery from natural hazards, terrorist attacks, and other national emergencies.”

There is no doubt that COVID-19 would fall squarely within the statute as a national emergency.

The law, which originally had seven operative sections, now has three, as we have written about here.

Title I of the act authorizes the president to prioritize certain defense programs, contracts, and orders, and allocate resources accordingly. This title aims to secure the adequate availability of materials from the private sector for use in the defense sector.

The allocations authority gives the president the authority to redistribute materials, equipment, and industrial facilities in order to stimulate defense production in necessary areas.

Title III of the act establishes the president’s authority to invest in specific industries. The goal of Title III is to expand the domestic capacity and supply for defense-related materials.

If triggered here to fight the virus, one would expect the administration to direct investment into industries directly related to fighting the virus.

Under this provision, the president is empowered to use a variety of financial incentives to create, maintain, and expand domestic industrial capabilities to produce goods and material critical for national defense.

Due to statutory restrictions on Defense Production Act loan authorities, they have not been used in more than 30 years. Hence, federal grants, authorized in Section 303, have been the predominant manifestation of Title III authorities.

Projects are funded by the Defense Production Act Fund, a Treasury account established by the act. Typically, Title III projects pursue a cost-sharing goal of 50% government funding and 50% recipient funding, which helps to catalyze private-sector investment for issues essential to national defense.

Before using Section 303 authorities under Title III, the Defense Production Act requires the president, on a non-delegable basis, to issue a presidential determination authorizing use of Title III authorities to address a domestic industrial base shortfall meeting certain statutory criteria.

The third and final operative section of the law can be found in Title VII. Title VII includes an array of provisions that complement the underlying purpose of the Defense Production Act. This title creates the basis for voluntary agreements, in which the president may consult with members of the defense industry to develop strategies and plans of action about how to better provide for national defense.

The law can include programs for energy production or construction. This provision has been used to stimulate domestic energy production for commercial uses. For example, the Obama administration used the Defense Production Act to fund biofuel technology projects.

We have been critical of such overuse of the Defense Production Act.  But under the current circumstances, we think the administration and Congress need to use all lawful tools, including federal statutes as properly understood, to defeat the coronavirus and help America get back on her feet.