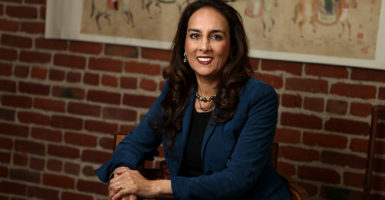 The threat to our First Amendment right of free speech is growing. College campuses continue to embrace progressive policies that restrict students’ ability to voice their opinions and beliefs.

Lawyer and First Amendment expert Harmeet Dhillon joins “Problematic Women” to discuss free speech in America and her view of feminism. Listen to the podcast below or read the lightly edited transcript.

Virginia Allen: I am joined by Harmeet Dhillon, lawyer and First Amendment expert. Harmeet, thank you so much for being here.

Harmeet Dhillon: Happy to be here.

Allen: I’d like to begin by hearing a little bit of your own story. You were born in India; you moved to America with your family as a child. What was that transition like for you?

Dhillon: Well, I was pretty small, and this was in the early 1970s when the Vietnam War was going on. America had a shortage of physicians. My father is a doctor, and he had been finishing his orthopedic training in the U.K. and the United States invited us over.

So he completed his training in New York and then decided that he wanted to raise his family in a rural community similar to where we had come from in India in the Punjab.

We still had the Ku Klux Klan active in rural North Carolina, and the Democrats were the party of discrimination and segregation. And so my parents, when they became became citizens, they registered to vote, and they’ve, throughout that time, impressed on myself and my brother the importance of being active in civil society.

Of course, a lot of our immigrant communities are very focused on academic achievement, and so I went off to Dartmouth when I was 16 years old and eventually pursued a law career. But I worked at [The Heritage Foundation] along the way actually.

Allen: Did you really?

Dhillon: Yes. My first job after Dartmouth was at the Policy Review magazine, which was then at The Heritage Foundation—it’s since moved to the Manhattan Institute—but that was from one year between college and law school.

Allen: Oh, that’s wonderful. That’s so neat. Wow. So why did you decide to pursue a career in law?

Dhillon: It was a free speech issue actually that really tipped me in that direction.

I was actually pre-med when I went to Dartmouth, and I have a lot of doctors in my family, but I became involved with the Dartmouth Review newspaper and eventually became the editor-in-chief of that paper, and it was probably the most prominent conservative college newspaper in America.

My predecessors as editor included Dinesh D’Souza, who also was my predecessor at this magazine at Heritage, and Laura Ingraham, so they’re both long-time mentors and friends of mine.

And at that time, we had something similar to what we have today, which is a real crackdown on conservative speech on campus and an intolerance of it.

And myself and my colleagues on the newspaper were discriminated against on the basis of our viewpoints, and in fact, three of my colleagues were actually suspended by Dartmouth for a story that they wrote about a music professor.

So we ended up getting legal support from the American Civil Liberties Union, which, back in the 1980s, still cared about free speech for everybody. And as a result of that litigation, we won this lawsuit.

So I was very active in that case and very active in the media, representing the views of the conservative students at Dartmouth. And that really sparked in me an interest in going into law and using the law to effect social change, among other things.

Dhillon: Well, free speech zones are really unconstitutional at public schools, and some states like California actually have statutes that apply the First Amendment to private schools as well. …

It’s just like gun law rights. The concept that you need a license to exercise your Bill of Rights, guaranteed rights that really spring from our natural rights as men and women is antithetical to the words in the Constitution.

So the role of lawyers who take on these free speech restrictions on, particularly, our public school campuses is to really, one by one, dismantle these barriers to freedom.

I have sued the University of California, Berkeley two years ago on behalf of Young America’s Foundation to prevent them from applying unlawful security fees and other restrictions to conservative speakers that they did not apply to liberal speakers.

You’d be surprised in today’s day and age, the university administrators think that is perfectly OK, and they get away with it because we don’t have an army of lawyers, unfortunately, ready to defend the rights of high school students and college students who suffer this type of discrimination.

Now, in that lawsuit, we were successful, and the lawsuit has resulted in University of California, Berkeley reaching a settlement that paid some of the attorney’s fees, but also, more importantly, took down that barrier. And now, in most cases, no student group will have to pay a security fee to bring a speaker to the campus.

I’m really proud of that, and I hope that through this type of effort, we can make sure that we have more freedom on campuses for all students, not just for students of a conservative viewpoint that I happen to have.

Allen: Yeah, absolutely. What do you see right now as one of the greatest threats to America’s First Amendment rights?

Dhillon: Well, it’s really the so-called progressivism. You know, when I was young, it used to be the American Civil Liberties Union, other liberal organizations, that fought for the rights of all Americans to be free in their property rights, in their voting rights, in their speech rights, in their exercise of liberty in general. But today, it is actually the American left that is the most restrictive of these rights.

The right to life is a very basic [right] that is really being restricted by the left, and so today, it is up to the more traditional constitutionalists to really enforce the Constitution in favor of liberty, and the choice and the right of Americans to be free from government interference.

I think [a woman can] be president, can be on the Supreme Court, can be the partner or head of a law firm, can be a politician, [can be] a business owner. You name it, a woman can do it, and so that gives us a lot of choices.

So I think women should avoid the temptation to be pushed into a role by their family, by their partner, and really make those choices for themselves, and then take the time to do that.

I think my year at Heritage was certainly useful to show me I didn’t want to be a journalist, for example. I actually like taking sides and being an advocate, and 27 years into that decision, I’m very happy that I chose the law profession. I think it is very powerful.

Any lawyer with a law degree can go into a court and vindicates the rights of a citizen, and over the years, I’ve helped women victims of domestic violence escape violent situations.

I’ve helped religious liberties plaintiffs vindicate their rights to practice in their faith and have their jobs or their education as they like.

I’ve helped conservative students and union members vindicate their free speech rights in the workplace and in the campus.

And so what is unique about being a woman, I guess, is I feel like women are very good at multitasking.

As a business owner and somebody involved in politics and public policy and in the media, I am constantly juggling different things, and we have that training or that innate skill to be able to be different things at different times of the day, which, I think, [for] guys [it is] a little harder for them to do that.

Allen: Yeah. So we love to ask everyone who comes on the show whether or not they consider themselves a feminist.

Dhillon: I think it depends on what your definition of feminist is. I am a woman who believes a woman can be and do anything. I do not believe in gender roles. And so, I think, yes, in a way.

I believe in women’s empowerment, but if that means signing onto an agenda that includes so many different things that are identified with feminism—abortion rights, rejecting traditional marriage, and many other things—I reject those things.

I’m happily married, and I very much treasure the family and traditional roles in that regard. But within that, I’m also a business owner. And to me, being a feminist in practice means that the people who work for me who are women, I’m making sure I respect their family lives …

So I have … [co-workers]—both male and female co-workers— [who] have a lot of flexibility to be parents and work from home and take care of their kids when they have to. I think that is true feminism—recognizing and nurturing people being their whole selves.

Allen: I love that. So good. Harmeet, thank you so much for your time.

Dhillon: My pleasure. Thank you for having me.