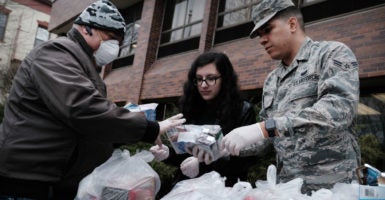 Members of the National Guard hand out bags of food to residents near a one-mile radius “containment area” set up to halt coronavirus March 12, 2020, in New Rochelle, New York. (Photo: Spencer Platt/Getty Images)

America is facing a major crisis. COVID-19 is rolling across the nation, as it has China, Japan, South Korea, Iran, and Italy. No one was ready for this new coronavirus, and measures that seemed wildly over the top even two weeks ago are being implemented nearly every day.

It is time to think about another set of options—using our uniformed military in some situations for some tasks.

Nothing should be off the table at this point. Every asset and option that can help stem the spread and effects of the pandemic must be considered.

The magnificent capabilities of the U.S. military in all its forms—active duty (Army, Navy, Marine Corps, Air Force, and Coast Guard) and reserve component (National Guard and Reserves)—should be part of the response.

The military can bring incredible logistical power and unmatched discipline and organization. It can be used to support law and order, although hopefully it won’t be needed for that. It also could provide sheer manpower that can be a game-changer in a crisis.

Unfortunately, some leaders are making “suggestions” and in some cases demands that are clearly uninformed and if tried would waste the capabilities of the military.

The recent call to retrofit buildings as hospitals feeds into this category. No one argues the need for additional medical facilities, but the Army Corps of Engineers is not the right agency for the job. The Corps is not some group of folks standing around wearing tool belts, who can be moved to start a building project.

The Army, Navy, and Air Force have limited combat and construction engineer units, but these are not part of the Corps and are better suited to putting up temporary facilities (mostly tents) as they often do overseas. They could be used this way, but they would only make a small dent in the potential need.

The other major “pipe dream” is to mobilize the National Guard medical units to set up additional hospitals.

Great idea, except that almost all National Guard doctors and nurses already work in civilian hospitals. Their mobilization would pull them out of their regular places of work, where they are desperately needed.

The last is that we could redeploy the active-duty medical personnel to augment our major hospitals.

Here the problem is that those same personnel are working on military posts and bases around the country in numbers that allow for proper medical care for the service members and their families on those installations.

There is a small surplus that could be called upon, but if all were moved to assist civilian facilities, it would only serve to add a significant number of patients from the military to any nearby civilian hospitals.

The best plan would be to submit to the Pentagon what help is needed and allow officials there to ascertain how best to meet those needs. The military does this all the time in floods, wildfires, hurricanes, and other disasters.

Our soldiers know they are the “responders of last resort” for the nation. They take that mission seriously and never have let the American people down.

So governors, don’t pre-define how the military can help. Just tell them what you need, and you will not be disappointed. This is America’s battle, and the U.S. military is ready to join the fight.