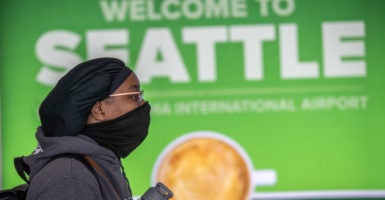 The next weeks and months will require each individual to take responsible action to prevent further spread of COVID-19. Pictured: A passenger walks through Seattle-Tacoma International Airport on Sunday in Seattle, Washington. The state has more than 700 confirmed cases of COVID-19. (Photo: John Moore/Getty Images)

The novel coronavirus disease, known as COVID-19, mostly has outpaced efforts by nearly every national government to prevent its spread. And the United States has yet to face the brunt of the disease’s effect.

As of this writing, the virus has reached every state save for West Virginia. It is likely that this is only the beginning of the disease. Or as Dr. Anthony Fauci, longtime director of the National Institute of Allergy and Infectious Diseases, said, “We will see more cases and we will see more suffering.”

Because of the foreign origin of the virus, the pandemic was relatively slow to reach the U.S., but the Trump administration was quick to enact travel restrictions to and from China.

This early action likely prevented a more pronounced outbreak in February. Indeed, the first confirmed case of COVID-19 in the U.S. was a man who had arrived in mid-January from Wuhan, China, the city where authorities say coronavirus originated.

Unfortunately, this was too late to prevent cases of community spread in Washington state; further travel restrictions on Europe did not come until March, despite widespread incidents of the disease, particularly in Italy.

Now, the states of Washington and New York both have  become new foci of infections, with over 700 cases each.

One of the lingering problems with the American response to COVID-19 has been testing for potential cases. At the beginning of the outbreak in Seattle, an opportunity arose to get ahead of the virus by testing a broad swath of nasal swabs collected as part of influenza research.

However, bureaucratic gridlock prevented that from happening, and researchers were delayed in identifying possible cases of COVID-19 and potentially isolating the disease.

Compounding the problem, the approved test kits shipped by the Centers for Disease Control and Prevention were slow to run and faulty, resulting in many precious hours lost and many inconclusive results. It wouldn’t be until March 10 that all 50 states had public labs with verified diagnostic tests for COVID-19.

In the meantime, the Food and Drug Administration announced a policy allowing numerous sophisticated labs in hospitals, universities, and private labs to conduct their own testing without what is called an Emergency Use Authorization.

Following this policy, new testing sites were set up by institutions such as the University of Washington, University of California San Francisco, and the Mayo Clinic.

In remarks Sunday, members of the White House coronavirus task force said that, altogether, some 2,000 laboratories will be able to process nearly 2 million tests this week.

The Emergency Use Authorizations for Roche and Thermo Fisher were issued within 24 hours of the FDA’s receiving the respective applications. This marks a stark increase in agility compared with the early testing logjams resulting from bureaucratic inflexibility.

It remains to be seen whether these measures meet expectations, but the decision to leverage private and local resources undoubtedly will lend much-needed flexibility to America’s response to COVID-19.

The reaction has not been limited to medical and public health institutions, but has grown to include organizations such as the NBA, Major League Baseball, numerous universities, and the Catholic Church, to name a few, all canceling or delaying events to inhibit spread of the virus.

Some state and local governments have taken more drastic steps. Los Angeles Mayor Eric Garcetti ordered closure of  bars, restaurants, clubs, theaters, and other establishments until the end of March. Ohio Gov. Mike DeWine ordered all bars and restaurants to close except for carryout and delivery services.

Although private organizations and institutions are doing well to discourage and decrease large gatherings, such orders by mayors and governors are heavy-handed. They almost certainly will help to reduce spread of the virus, particularly as Americans still seem blithe about the virus transmissibility in crowds. But it would be preferable for more Americans to voluntarily practice social distancing.

A more hopeful development: Testing has begun on a new vaccine against COVID-19 that was developed by the National Institutes of Health working with the biotech firm Moderna.

This is only the first phase of three, however, and it may take a year or more before it is ready for widescale use. The three phases are intended to show that the vaccine under study does not harm healthy people and that it works.

The American response to COVID-19 has had mixed results.

Initial missteps in testing meant that almost the entire month of February was a missed opportunity. But the early weeks of March saw the Trump administration loosen many of the bureaucratic hang-ups that were preventing a more agile and adaptable response.

The public continues to have mixed reactions, with many choosing to stay at home and practice social distancing, while others continue to congregate in large crowds at bars and restaurants.

The next weeks and months will require each individual to take responsible action to prevent further spread of COVID-19. The activation of all the labs in the country and the vast increase in testing capacity marks a new phase in our response to the pandemic.

There is still a ways to go, but all the successes thus far have been when Americans, not just the government, participate in the efforts to fight the virus.