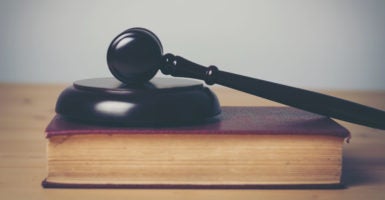 The decision to postpone master calendar immigration hearings comes after an unprecedented coalition called for the courts to be closed to stop the spread of coronavirus. (Photo: Prakasit Khuansuwan / EyeEm/Getty Images)

The Department of Justice ordered all initial immigration courtroom hearings in the month ahead to be postponed, following outcry from an unlikely coalition of immigration prosecutors, attorneys, and judges.

The Justice Department’s Executive Office of Immigration Review announced late Sunday night that all master calendar hearings scheduled between Monday and April 10 would be put on hold in a statement issued on Twitter. The announcement marked one of the latest decisions to halt procedures due to the worldwide coronavirus pandemic.

“Master calendar” hearings refer to any initial hearings for foreign nationals awaiting a decision by an immigration judge for asylum, deportation, or other immigration-related cases.

“All non-detained aliens’ master calendar hearings scheduled 03/16-04/10 are postponed. Usual operations for filings except Seattle. All other hearings proceeding,” the Executive Office of Immigration Review tweeted.

The office is comprised of nearly 60 immigration courts throughout the U.S., which was dealing with an immense backlog of cases well before the novel coronavirus began to effect productivity. 2019’s southern border crisis resulted in a backlog of more than 1 million active cases within the immigration court system.

All other immigration hearings will continue to remain on schedule, and postponements only affect migrants who are not currently in custody. The Seattle court, which reportedly experience second-exposure to COVID-19, will remain closed until April 10.

The decision to postpone master calendar hearings comes shortly after an unprecedented coalition—immigration prosecutors, immigration judges, and immigration lawyers—called for the courts to be shut down to stop the spread of the coronavirus.

“Our nation is currently in the throes of a historic global pandemic,” the joint statement read. “The Department of Justice’s (DOJ) current response to the COVID-19 pandemic and its spread is insufficient and not premised on transparent scientific information.”

The three groups called for immigration courts to be closed for as long as a month, if necessary.