Here’s How the Courts Are Coping With Coronavirus 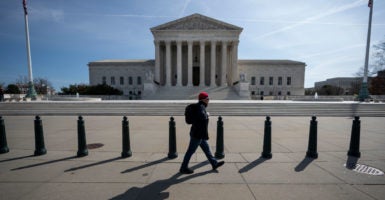 A man walks past the U.S. Supreme Court March 16, 2020, in Washington, D.C. The Supreme Court announced on Monday that it would postpone oral arguments for its March session because of the coronavirus outbreak. (Photo: Drew Angerer/Getty Images)

With schools, businesses, and many government offices closing in an effort to halt the spread of coronavirus, state and federal courts are starting to follow suit.

Courts across the country are grappling with how to respond to the outbreak while balancing the health and safety of court personnel and litigants against the need to handle emergency matters.

Some courts will proceed with jury trials, arguments, and other matters in person. The D.C. Superior Court, for example, has postponed starting any new criminal trials until after May 1, but will continue ongoing trials and hearing emergency matters, such as petitions for protection orders.

Some courts are conducting hearings by telephone or videoconferencing. While many courthouses remain open to the public, they strongly discourage visitors until the pandemic passes.

The U.S. Supreme Court announced Monday that it will postpone oral arguments scheduled between March 23 and April 1. The justices were supposed to hear arguments in cases challenging a state grand jury and congressional attempts to subpoena President Donald Trump’s financial records.

The justices will meet on Friday in a private conference, and the court indicated that some of the justices will participate by phone instead of in person. The court also may continue to release orders and opinions in cases as they are decided. The justices would not need to be physically present at 1 First Street NE in Washington for that to occur.

The majority of the justices are 65 or older, putting them at a higher risk for serious illness if they contract coronavirus. Indeed, four-time cancer survivor Justice Ruth Bader Ginsburg turned 87 over the weekend, and Justice Stephen Breyer is 81. Only Justices Elena Kagan, Neil Gorsuch, and Brett Kavanaugh are 60 or younger.

The court is well-known for soldiering on with arguments notwithstanding events in the outside world. During blizzards and hurricanes, when other federal buildings have shuttered, the court has proceeded with arguments.

In fact, when Washington, D.C., was hit with 21 inches of snow in 1996, then-Chief Justice William Rehnquist, a Wisconsin native, refused to cancel oral arguments and instead sent Jeeps to pick up the justices from their homes.

After an anthrax scare in the court’s mailroom in 2001, the justices relocated to the federal building that houses the D.C. federal district court, Court of Appeals for the D.C. Circuit, and FISA court for oral arguments.

The high court also continued hearing oral arguments during government shutdowns in 2013 and 2019. However, the court abbreviated its sittings after yellow fever outbreaks in August 1793 and August 1798 and rescheduled arguments during the height of the Spanish influenza in October 1918.

The court made the right call in postponing the upcoming March arguments, not only to safeguard the justices’ health, but also the health of all the other people who would be present in the courtroom.

When the court announced that arguments were postponed, it didn’t indicate when those cases would be rescheduled. The next scheduled sitting is April 20-29.

During a typical sitting, the court hears two oral arguments per day, at 10 a.m. and 11 a.m. It occasionally has added an afternoon argument starting at 1 p.m.

In the April sitting, there are three days with only one case each set for argument, so the court could add one or two arguments to each of those days. It also could add afternoon sessions to the other remaining days. Another alternative is to add an extra week or two of arguments, extending into early May.

Whatever the court decides to do, the justices will have quite a few opinions—tackling gun rights, abortion, Obamacare, and immigration, to name a few—to pen in May and June if the justices plan to stay on track with their June 29 end date.

That’s a self-imposed deadline, however, so the court could extend its term by a few weeks to give the justices more time to write their opinions. Given the high volume of blockbuster cases the justices are hearing this term, they may very well appreciate having a few extra weeks to labor over their opinions.

And then, as in years past, they can decamp to their various summer vacation spots after dropping their biggest, most controversial decisions.

In short, postponing the late March arguments was the right thing to do, and it will probably lead to a slightly later conclusion to the 2019-2020 term, but it likely will not have a huge impact on the court’s work.