How Congress Can Help Retirees Amid Market Turmoil 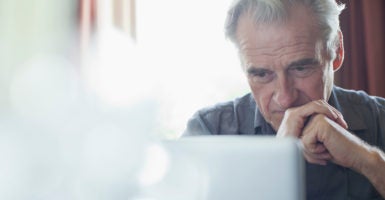 As of 2020, American retirees ages 72 and older must take a “required minimum distribution” each year from their retirement account. (Photo: Sam Edwards/Getty Images)

This means anyone with a retirement account or other investments likely has taken a significant hit. Assuming they don’t need that money in the short term, history suggests the market will rebound and investors will do quite well in the long run.

But for older Americans, the law doesn’t allow them to just ride it out. As of 2020, Americans ages 72 and older must take a “required minimum distribution” each year from their retirement account. (The age 72 requirement marks an increase from the age 70.5 that applied prior to passage of the SECURE Act in 2019).

That minimum required distribution is a percentage—which increases with age—of retirees’ accounts on Dec. 31 the prior year.

The difference is even larger for older individuals. The required minimum distribution for a 95-year-old with a $1 million retirement account is about $116,000, which is $27,000 more than they would have to withdraw based on their current account value.

A rule that requires individuals to take even larger percentages out of their retirement accounts when they’ve suffered a significant loss can hurt retirees’ future finances because that money can’t benefit from longer-term growth.

If individuals were free to leave their money in the market until they need or want to take it out—instead of being forced to follow rigid regulations —they would have more opportunity to recoup some of the money they’ve lost.

Many retirees likely are invested in lower-risk instruments such as bonds, but for those who do have significant market exposure, Congress should let them ride out this storm.

Removing required minimum distribution rules also would help middle-class savers who want to pass on their small nest eggs to their children. Retirement accounts are one of the more common ways typical Americans receive an inheritance. When the government requires these accounts to be spent down, especially in market downturns, the rules actively destroy middle-class wealth.

No one should have to be told how much money they have to take out of their retirement account at any time, but particularly in light of coronavirus disruptions and fears, retirees should be freed from required minimum distributions. This move also could restore and improve confidence in the market.