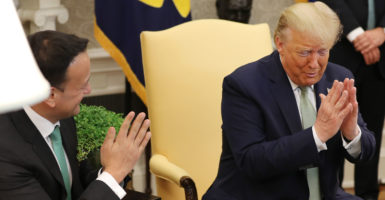 Their minds on the coronavirus, President Donald Trump and Irish Prime Minister Leo Varadkar show how they prudently greeted each other while talking to reporters Thursday before their meeting in the Oval Office. (Photo: Chip Somodevilla/Getty Images)

President Donald Trump said Thursday that he doesn’t support House Democrats’ coronavirus relief bill in its current form because it includes too many “goodies” that have nothing to do with the disease.

Although the bill addresses providing testing and masks to respond to the coronavirus, it also expands unemployment insurance and food stamps, requires the Social Security Administration to provide paid sick leave, and mandates that employers give paid permanent sick leave to their employees.

A reporter asked Trump at the White House if he supports the legislation.

“No, because there are things in there that have nothing to do with things we are talking about,” Trump told reporters in the Oval Office as he sat with Irish Prime Minister Leo Varadkar.

“It’s not a way for them to get some of the goodies that they haven’t been able to get for the last 25 years,” the president said of House Democrats.

As of Thursday afternoon, there were 36 deaths in the U.S. from the new coronavirus disease, called COVID-19, with a total of 1,215 diagnosed cases across 42 states and the District of Columbia, according to the Centers for Disease Control and Prevention.

Trump delivered a prime-time address to the nation Wednesday night in which he announced a ban on travel to the U.S. from most European countries and proposed a payroll tax cut and assistance for industries and employees hit hard by the virus.

The president previously restricted travel from China, where the virus originated.

“The Families First Coronavirus Response Act is focused directly on providing support for America’s families, who must be our first priority in this emergency,” House Speaker Nancy Pelosi, D-Calif., said in a public statement.

The spread of the coronavirus has prompted calls for more government action. The Democrats’ bill includes free coronavirus testing, paid emergency leave for up to 14 days, and more protections for health care workers who might come in contact with infected people.

“We cannot fight coronavirus effectively unless everyone in our country who needs to be tested knows they can get their test free of charge,” Pelosi said. “We cannot slow the coronavirus outbreak when workers are stuck with the terrible choice between staying home to avoid spreading illness and the paycheck their family can’t afford to lose.”

House Minority Leader Kevin McCarthy, R-Calif., contended that the Democrats are playing politics, but said Congress should remain in session until it gets the bill right.

During the Oval Office session, Trump elaborated on why he excluded the United Kingdom from the ban on travel from Europe.

“One of the reasons [is] the U.K. basically has got the border … it has got very strong borders, and they are doing a very good job,” Trump said. “They don’t have very much infection at this point, and hopefully they keep it that way.”

Trump said life and death issues guide his decisions in dealing with the coronavirus:

The president said the stock market is stronger now than when he came into office and predicted it will bounce back.

“Whether it affects the stock market or not [is] very important, but it’s not important compared to life and death,” Trump said. “Frankly, the people that are professionals praised the decision. It’s something I had to do. I think you’ll see the end result is very good because of it, but it will take a period of time.”

Trump said he is “not concerned” about reports that a member of a Brazilian delegation who tested positive for COVID-19 had contact with him last weekend at his Mar-a-Lago resort in Palm Beach, Florida.

“Exposures from the case are being assessed, which will dictate next steps,” Grisham said, adding:

Both the president and vice president had almost no interactions with the individual who tested positive and do not require being tested at this time.

As stated before, the White House Medical Unit and the United States Secret Service [have] been working closely with various agencies to ensure every precaution is taken to keep the first and second families and all White House staff healthy.

Kelvin Droegemeier, director of the White House Office of Science and Technology Policy, announced Thursday that he held a conference call with government science officials from Australia, Brazil, Canada, Germany, India, Italy, Japan, New Zealand, Singapore, South Korea, and Britain on how to tackle the pandemic.

He said the officials talked about sharing more data, how artificial intelligence can be used, and data-sharing repositories.

In the Oval Office session with reporters, Trump was asked if larger quarantine zones in the United States are an option.

“It’s a possibility if somebody gets a little bit out of control, if an area gets too hot,” Trump said. “You see what they are doing in New Rochelle, which is good frankly, but it’s not enforced. It’s not very strong. But people know they are being watched. It’s a hot spot.”

A reporter asked the Irish and American leaders if they shook hands.

They replied that they hadn’t, and instead placed their own palms together in greeting, which was “sort of a weird feeling,” Trump said.

The president said that in India and Japan, where he has visited, shaking hands is less customary.

“They were ahead of the curve,” he said.

Trump acknowledged his reputation as a bit of a germaphobe before entering politics.

“I was never a big hand-shaker as you probably have heard, but once you become a politician, shaking hands is very normal,” he said.

The Irish prime minister followed by saying, “It almost feels like you’re being rude, but we just can’t afford to think like that for the next few weeks.”