Top Health Official Calls Coronavirus Testing ‘a Failing’ in the US 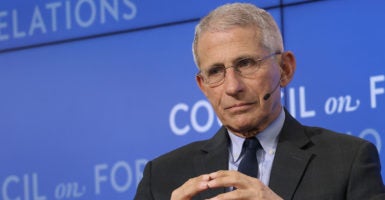 “The idea of anybody getting [coronavirus testing] easily the way people in other countries are doing it, we’re not set up for that,” says Dr. Anthony Fauci, director of the National Institutes of Health's Institute of Allergy and Infectious Diseases. Pictured: Fauci participates in a Feb. 18 discussion on biosecurity at the Council on Foreign Relations in Washington, D.C. (Photo: Chip Somodevilla/Getty Images)

Dr. Anthony Fauci, a top government expert on infectious diseases, told Congress on Thursday that the U.S.’ ability to test for coronavirus has been “a failing,” comments that are in stark contrast to President Donald Trump’s assurances that testing for the virus “has been going very smooth.”

“The system is not really geared to what we need right now,” Fauci, the director of the National Institute for Allergy and Infectious Disease, told Florida Rep. Debbie Wasserman Schultz during a House Oversight Committee hearing.

“That is a failing.”

Lawmakers pressed Fauci and Dr. Robert Redfield, the director of the Centers for Disease Control and Prevention about the slow pace of testing in the U.S. versus countries like South Korea.

Federal and state government agencies and the private sector have conducted around 11,000 tests for coronavirus in all. South Korea, in contrast, tests 10,000 potential coronavirus carriers each day.

“Let’s admit it,” said Fauci, a member of the White House’s coronavirus task force. “The fact is the way the system was set up was that the public health component … was a system where you put it out there in the public, and a physician asks for it and you get it.”

“The idea of anybody getting it easily the way people in other countries are doing it, we’re not set up for that.”

The federal government has been slow to ramp up testing as coronavirus continues to spread through the United States.

The Centers for Disease Control and Prevention developed tests in February that turned out to be flawed. There have also been reports that universities and private labs have been delayed in distributing tests because of bureaucratic hurdles at the state and federal level.

While health experts like Fauci have called for more testing, Trump has sent out mixed signals, saying the U.S. is doing enough to track down coronavirus cases, and that patients who want a test can easily get one.

“Anyone who wants a test can get a test,” Trump said Saturday.

As of Thursday, more than 1,300 Americans have tested positive for coronavirus, which began spreading in China in December 2019. Thirty-eight people in the U.S. and more than 4,700 across the globe have died from the virus.

Dr. Stephen Redd, who leads the Centers for Disease Control and Prevention’s Office of Public Health Preparedness, testified Wednesday that the agency had only conducted 1,784 tests in all, Yahoo! News reported.

That means that the health agency conducted only 77 tests from Sunday through Wednesday, according to Yahoo! News.

Rep. Jan Schawkowsky, D-Ill., said Thursday that lawmakers were told during a House briefing that the public sector has conducted 7,300 tests, versus 3,800 through the private sector, according to CNN.