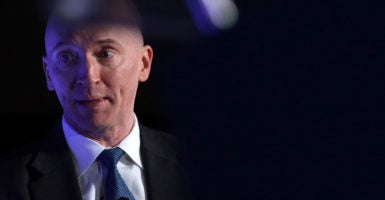 That’s who drove the House, including members of both parties, to pass major reforms Wednesday evening to the Foreign Intelligence Surveillance Act by a vote of 278-136.

Page, of course, is the Navy veteran, business consultant, and former Trump campaign adviser who the FBI decided to spy on as a suspected Russian agent in 2016.

Four provisions of FISA will expire, or sunset, on Sunday unless Congress reauthorizes them. The provisions were set to expire three months ago, on Dec. 15, but Congress had extended them.

Several major developments in the past six months moved the dial from whether Congress would reform any of the four provisions to which ones lawmakers would reform, how, and why in the legislation called the USA Freedom Reauthorization Act of 2020.

Before explaining what moved the dial, how the politics quickly changed on this, and the merits of the reforms themselves, it’s important to highlight the four expiring provisions and what they do.

Congress first passed the four provisions in the wake of the 9/11 terrorist attacks.

Ironically, they have nothing to do with wide-ranging procedural abuses in the application process in 2016 for warrants under the Foreign Intelligence Surveillance Act to spy on Page, the Trump campaign volunteer. These abuses were highlighted in a report from the Justice Department’s inspector general, which we wrote about here.

But that doesn’t seem to matter to Congress at this point.

The most common example is when a terrorist buys burner phones and switches phones frequently to avoid detection. Roving wiretaps are used routinely in domestic criminal law enforcement investigations, and should not be controversial in the counterterrorism context.

The business records provision (Section 215 of the Patriot Act, found at 50 U.S.C. § 1861) permits the government to apply to the Foreign Intelligence Surveillance Court to obtain “tangible things” such as documents, records, driver’s licenses, and the like—as long as they are deemed “relevant” to an ongoing investigation into international terrorism or foreign intelligence.

To use this provision, the FBI must be conducting one of three types of investigations:

—A foreign intelligence investigation, as long as it does not concern a U.S. person.

—An investigation to protect “against international terrorism,” which could include a U.S. person.

—An investigation to protect against “clandestine intelligence activities,” whether targeting a U.S. person or not.

The “call detail record” program grew out of the USA Freedom Act of 2015.

Recall that Edward Snowden revealed that the U.S. government had been collecting bulk records of telephone metadata from the phone companies.

The Foreign Intelligence Surveillance Court has been issuing orders to phone companies, under an interpretation of Section 215, which required those companies to provide telephone metadata secretly to the National Security Agency, including data from Americans.

The lone wolf amendment to the “agent of a foreign power” definition in FISA allows the government to use lawful tools to surveil that person.

First, there was special counsel Robert Mueller’s investigation of nearly two years, which concluded that although Russia attempted to disrupt the 2016 election, there was no evidence that then-candidate Donald Trump colluded with Russia to influence the election.

Mueller’s report debunked the incessant liberal mantra and narrative that Trump and Russia colluded with each other so that Trump could win.

Second, there was the report by Justice Department Inspector General Michael Horowitz on the four FISA warrants to surveil Page that the FBI obtained. In his scathing report, Horowitz methodically lays out the myriad deficiencies in the FBI’s warrant applications, and how those applications failed on numerous fronts, as we wrote about here.

Third, Horowitz’s report on FISA abuses got the attention of the presiding judge of the FISA court, Rosemary Collyer, who ordered the Justice Department and FBI to “inform the court in a sworn written submission of what it has done, and plans to do, to ensure that the statement of facts in each FBI application accurately and completely reflects information possessed by the FBI that is material to any issue presented by the application.” That was an extraordinary move, as we wrote here.

And fourth, in response to Collyer’s demand, the FBI admitted in a filing with the FISA court that two of the FBI’s four applications for warrants to spy on Page lacked probable cause and should not have been submitted in the first place.

What’s more, the FBI made “material misstatements and omissions” in those two warrant applications, according to the Justice Department, and the agency isn’t using information from any of the four warrants now, as we wrote about here.

To right the ship, FBI Director Christopher Wray directed the bureau to take more than 40 corrective actions, including 12 that relate to the FISA process. These proposed actions are substantive and serious and would, if enacted and carried out, go a long way to improve the system.

But given all that had happened, Congress was not going to trust the FBI, or future Justice Departments, to institutionalize the reforms Congress deemed necessary to make sure that these types of FISA abuses wouldn’t occur again.

Cementing those reforms in legislation is the only way Congress can assure itself that the Carter Page fiasco won’t be repeated again in the future, so the thinking goes.

The House bill reauthorizes the lone wolf, business records, and roving wiretap provisions. This is prudent.

Business records and roving wiretaps are used daily in domestic criminal law investigations and form the backbone of many cases. They should be equally available, via order of the Foreign Intelligence Surveillance Court, for counterterrorism investigations.

Reauthorizing the lone wolf provision, despite the fact that it has not been used, is prudent because individuals inspired by terrorist groups or organizations do exist and have grown in recent years. Giving the government the ability to petition the FISA court for an order to use lawful tools to surveil lone wolves is a step that protects our interests.

The USA Freedom Reauthorization Act of 2020, the legislation passed Wednesday by the House, would repeal the call detail record program. This is not surprising for a number of reasons.

First, the program was difficult to administer in the first place, according to the National Security Agency. Since the bulk collection program was ended in the USA Freedom Act of 2015, the NSA replaced it with a supposedly targeted effort called the CDR program.

In June 2018, the National Security Agency admitted that there were “technical irregularities” in implementation of the program, and as a result, phone companies had provided call detail records to the NSA that they should not have provided.

The NSA said that it was not able to separate the proper call data records from the ones that it shouldn’t have gotten, so the agency deleted all of them dating back to 2015, when the statute was first passed.

This called into question, quite reasonably, whether the program itself was useful in the first place.

By letting the program sunset, Congress is answering that question for the NSA. What that means in practical terms is that the situation will revert back to the way it was before passage of the USA Patriot Act.

Back then, as law professor Robert Chesney writes, the FISA court “could authorize production of records only from entities that count as common carriers, public accommodation facilities, storage facilities, or vehicle rental facilities.”

Furthermore, the government had to have “specific and articulable facts giving reason to believe that the person to whom the record pertains is a foreign power or agent of a foreign power.”

Although the Department of Justice and FBI announced over 40 reforms to the application process for warrants under the Foreign Intelligence Surveillance Act, especially in politically sensitive cases, Congress decided to cement processes it believed would reform the system by legislating change.

Many of these reforms have merit, at first blush.

As a result of the USA Freedom Act of 2015, attorneys serving as amicus curiae (impartial advisers, at least in theory) already assist the FISA court in a limited manner. This reform would broaden the role of amicus attorneys before the court and include any case involving the political activity of a U.S. citizen.

Perhaps the most meaningful set of reforms, which the FBI already had identified and started to implement internally, was the need to make sure that FISA applications contain all information about a potential target. This would include potentially exculpatory information or information that cuts against the government’s request itself.

This makes common sense, and one, no doubt, the FISA court judges themselves have been concerned about after the Page fiasco.

Several reforms concern holding to account those who, in the future, knowingly hide information from the court, knowingly making a false declaration in an affidavit before the court, intentionally disclose a FISA application, or engage in other misconduct.

These are, for lack of a better term, the “Carter Page reforms,” and they are commonsense reforms.

Any attorney or law enforcement official who engages in similar misconduct in state or federal court would face consequences, so there is no reason that similar rules shouldn’t apply to the Foreign Intelligence Surveillance Court and those appearing before it.

It remains to be seen what the Senate will do with the House-passed legislation.

Because the intelligence community may be concerned about leaks, the Trump administration could face some pushback regarding the reform requiring independent legal advisers to identify issues with warrant applications.