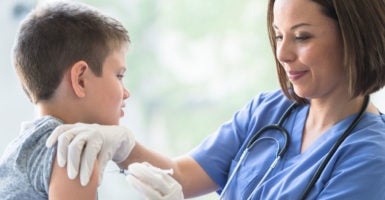 It seems counterintuitive, because it is. And yet, in the heat of a nationwide transgender debate, a group of “experts” has decided that puberty blockers, the same drugs linked to thousands of adult deaths, are good for kids.

As part of a new Pediatrics article, three doctors claim to have found “positive mental health outcomes” for minors. That’s interesting, a group of physicians is firing back, since only 2.5% of the children they studied actually took the drugs.

There are plenty of other flaws in the research, Dr. Den Trumbull told me on Tuesday’s “Washington Watch”—not the least of which is that the data actually shows “the reverse of what they’re claiming.”

Even if the experts can’t bring themselves to admit that, he said, they should at least know “there’s no benefit when the results are objectively looked at.”

But unfortunately, in their rush to get the media and the rest of America on their side for these radical treatments, they took what Trumbull calls “a very biased and poor[ly] design[ed] approach.” And in the end, the former president of the College of American Pediatricians agrees, they “achieved the results they desired to achieve.”

But you don’t have to be a scientist or even a doctor to be suspicious about the findings. For starters, the authors of the study are affiliated with the pro-LGBT Fenway Institute, whose whole purpose is to promote these kinds of outcomes in research. So clearly, there was already a radical agenda at work.

Secondly, a lot of young adults have come forward to talk about their horrible experiences on puberty blockers, and how much regret and depression they caused them.

For a journal like Pediatrics to suggest that these treatments are healthy options, Trumbull argues, is “extremely dangerous.”

“And unfortunately,” he warns, “the American Academy of Pediatrics been doing this more and more with social issues. It’s a very prestigious organization that in general is very objective in its research, but not when it comes to [LGBT] issues.”

Most people assume that researchers on such a controversial topic would follow the most rigorous standards for their study. “But in this situation, they have not … It’s a study based on interviews,” Trumbull says.

It’s what’s called a cross-sectional study that cannot prove causality. It can only show association. And then, finally, it’s not a longitudinal study. In other words, they didn’t take a group of adolescents, follow them over 10, 15, 20 years and see the results of the therapy that they instituted in the beginning.

Instead, they’re just interviewing these kids who identify as transgenders, asking them about their past, and whether they feel better about what they did or not.

So when the researchers say teenagers would be less suicidal on these drugs, they’re being fundamentally dishonest.

When you sit down and compare the two groups of children—those who took the drugs and those who didn’t—there’s really no difference, Trumbull argues. And yet, all of that information is buried in the charts and ignored.

The bottom line is, “It’s not based on science.” But the problem is, legislators, educators, and the media are looking to the “experts” at places like the American Academy of Pediatrics and taking their word for it. “So the whole movement is being misled and parents are being misled as well.”

You can change the way [kids] look. You can stop perfectly normal puberty from occurring, which is harmful in and of itself. But you can’t change the chromosomal makeup of the child.