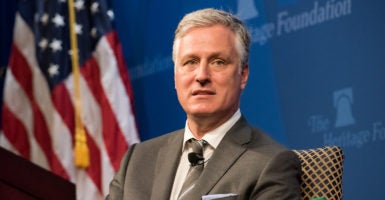 O’Brien’s remarks come as the communist Chinese government has tried to deny the disease’s origins in the city of Wuhan and pushed internet rumors that the United States created it.

“This virus did not originate in the United States. It originated in the Wuhan, in the Hubei province in China,” O’Brien said in an appearance at The Heritage Foundation.

“It originated some time ago. Unfortunately, rather than using best practices, this outbreak in Wuhan was covered up.”

As of early Wednesday, officials had confirmed 938 cases of COVID-19, the disease caused by the virus, across 38 states. There were a total of 29 deaths, all but a few in Washington state.

“There is a lot of open-source reporting from China, from Chinese nationals, from doctors involved [who] were either silenced or put into isolation or that sort of thing, so the report of this virus did not get out,” O’Brien said.

O’Brien, who is President Donald Trump’s top adviser on foreign affairs and national security matters, said the World Health Organization and the U.S. Centers for Disease Control and Prevention could have assisted China in early containment and treatment before the outbreak. He said:

It probably cost the world community two months to respond. And in those two months, if we had those and had the cooperation of the Chinese, and a WHO team been on the ground and a CDC team—which we had offered them on the ground—I think we could have dramatically curtailed what happened in China and what is now happening across the world.

In a recent example, Chinese Foreign Ministry spokesman Zhao Lijian, said March 4: “Some in the media say this coronavirus is a China virus. This is extremely irresponsible and we firmly oppose that. We are still tracing the origin of the virus and there is no conclusion yet.”

Other Chinese diplomats denied the disease’s origins in China and took offense to references of “Wuhan” in describing the virus.

More than just dodging responsibility, the Chinese government reportedly has pushed propaganda that the United States created  the virus.

O’Brien spoke well of the Trump administration’s response in assembling a task force and closing off travel to the U.S. from China.

“Pandemics and epidemics are some of the greatest challenges we face as a country. I think we’ve done a good job responding to it,” O’Brien said. “But look, the way this started out in China from the outset was not right. It should have been handled differently. But we are where we are right now. We are doing our best to work with the Chinese.”

O’Brien, who replaced John Bolton in the key White House post, also spoke about reforms to the National Security Council.

He announced plans in October to streamline the 174-member staff to fewer than 120. This has prompted controversy as Trump has demonstrated distrust of some in the government bureaucracy after the impeachment battle.

“We brought the size down, but we’ve done it for the most part through attrition and holding off on hiring,” O’Brien said.

O’Brien said he was following the model of President George H.W. Bush’s national security adviser Brent Scowcroft by having a leaner staff. He also noted that he has met with his predecessors, both Republican and Democrat.

A high profile removal was Lt. Col. Alexander Vindman, who had testified during the House impeachment inquiry that aspects of Trump’s phone call with Ukraine’s president were inappropriate.

Vindman, who was in charge of European affairs, was sent back to work in the Pentagon last month, causing an uproar among Democrats.

“I think that some people decided the NSC was going to be a career for them and they were going to stay there as long they could. And I think there were people who felt they knew better how to conduct the foreign policy of the United States than the elected president of the United States,” O’Brien said, without mentioning any names or specifying the impeachment inquiry.

If you’re on the president’s staff and you don’t agree with the president, and you can’t put your disagreement aside, and you can’t get on board with the president’s policy, then you’re probably better served and the country’s probably better served if you’re back at an agency doing something where you’re not trying to make policy or create policy or thwart policy or resist policy. Or you’re better off going to run for Congress or state Senate or Senate, where you can be a policymaker. …

We are there to staff the president and make sure he gets the best advice on policy possible and to make sure his policies are implemented. If you’ve got a different view of what you should be doing, the NSC is probably not the best place for you to be serving.