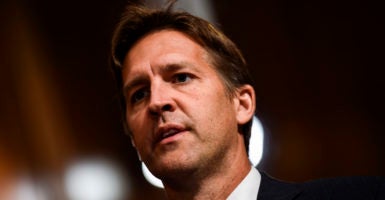 Sen. Ben Sasse, R-Neb., warns that Pornhub’s “incredible reach has a much darker side than the image of harmless fun that it tries to project.” Pictured: Sasse during markup hearing on the nomination of Brett Kavanaugh to be an associate justice of the Supreme Court on Sept. 28, 2018. (Photo: Brendan Smialowski/AFP/Getty Images)