4 Things to Know About Chinese Origins of Coronavirus 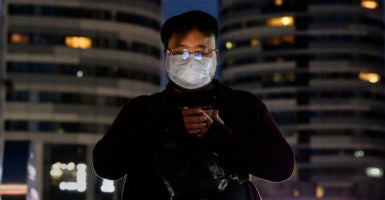 A man wearing a protective mask looks at his mobile phone Tuesday in a shopping area in Beijing, China. The number of cases of the deadly new coronavirus being treated in mainland China dropped to below 18,000 Sunday, in the outbreak that the World Health Organization last month declared a global public health emergency. (Photo: Kevin Frayer/Getty Images)

Before MSNBC personalities were calling it “racist” and “astoundingly gross” to note the origin of the new coronavirus, NBC News reported in January on what it called the “Wuhan coronavirus.”

In recent days, the Chinese government has sought to cast doubt on whether the virus in fact originated in the city of Wuhan after initially acknowledging that the disease emerged from Wuhan, known as “South China Seafood City.”

Secretary of State Mike Pompeo and Rep. Paul Gosar, R-Ariz., prompted outrage from China’s communist government and the mainstream media in the U.S. for using the phrase “Wuhan virus.”

“But these are … the great health insurance companies, and I think tremendous progress is being made. They’re willing to do things for the people and their customers and probably, in a true sense, beyond their customers that normally, I don’t think, they’d be doing.”

Trump didn’t address the issue of the disease’s Chinese origin, but here are what some other officials are saying about it.

1. What Chinese Officials Have Said in Denial

“Some in the media say this coronavirus is a China virus. This is extremely irresponsible and we firmly oppose that,” Zhao Lijian, spokesman for the Chinese Foreign Ministry, said March 4. “We are still tracing the origin of the virus and there is no conclusion yet.”

Zhao said the disease, which health officials call COVID-19, short for coronavirus disease 19, is a “global phenomenon with uncertain origins.”

“The COVID-19 first appeared in China. That doesn’t mean its origin is in China,” Zhao said.

Lin Songtian, China’s ambassador to South Africa, expressed a similar view in a tweet over the weekend.

“Although the epidemic first broke out in China, it did not necessarily mean that the virus is originated from China, let alone ‘made in China,’” Lin tweeted.

2. How the Chinese Blame America

More than just dodging responsibility, the Chinese government reportedly has pushed propaganda that the United States started the virus.

“In recent days, run-of-the-mill mockery of the White House has taken a darker turn as the Chinese internet became inundated by the theory, subtly stoked by the Chinese government, that the coronavirus originated in the United States,” the newspaper said. “The U.S. government, one version of the theory goes, has been covering up mounting cases, and perhaps thousands of deaths, by classifying them as regular flu.”

There have been false internet rumors in the United States about China as well, but there is a clear difference, said Dean Cheng, senior research fellow for Asian studies at The Heritage Foundation.

“The problem here is that this seems to be echoes of Soviet information warfare,” Cheng told The Daily Signal. “America has a free press, from CNN to Alex Jones, The New York Times, and the National Enquirer. China’s press is state run. So these rumors are not random charges.”

The goal of the Chinese government is to define the virus as being as distant from government leaders and the Communist Party as possible, Cheng said.

Xiao Qiang, an adjunct professor at the University of California at Berkeley’s School of Information, studies China’s internet.

“Go on WeChat, go on Weibo, look on Baidu search, and it’s full of ‘look at all the other countries getting sick,’ or ‘the virus came from the United States,’ or all different levels of conspiracy theories,” Qiang told the Post.

NBC News reported March 6: “In recent weeks … Chinese officials have appeared eager to float the idea that the virus did not necessarily start in their country at all.”

3. What Chinese Officials Used to Say

During a press briefing Friday, Pompeo sought to prevent China from escaping responsibility.

“The Wuhan virus that began at the end of last year is something that this administration is taking incredibly seriously,” Pompeo told reporters. “The State Department has been very involved from the beginning when we worked diligently to get hundreds of Americans out of Hubei province, out of Wuhan, and get them back to the United States safely.”

Wuhan is the capital of Hubei province, in central China.

A reporter later said to Pompeo: “You called it the Wuhan virus, and I haven’t—that’s an accurate way to depict where it’s coming from.”

The secretary of state responded: “The Chinese Communist Party has said that this is where the virus started. So don’t take my word for it; take theirs.”

Chinese President Xi Jinping, in a Feb. 3 speech to the Politburo, talked about Wuhan.

Twenty-seven cases have been found, of which 7 are in serious condition, and the remaining cases are stable and controllable. Two patients are expected to be discharged in the near future.

The clinical manifestations of the cases were mainly fever, a few patients had difficulty breathing, and chest radiographs showed bilateral lung infiltrative lesions. At present, all cases have been isolated for treatment, follow-up investigations and medical observations of close contacts are ongoing, and hygiene investigations and environmental sanitation disposals for South China Seafood City are ongoing.

4. What the Media Has Said

Cheng noted the Chinese government doesn’t have 100% control of the internet in China, and citizen journalists have been able to report what is happening in the country with the virus, though the government typically cracks down within a number of days.

“The Chinese are savvy in their observation of U.S. media and how parts of the punditry react,” Cheng said.

In response to Gosar’s referring to the “Wuhan Virus” in a tweet about how he self-quarantined, MSNBC prime-time host Chris Hayes tweeted: “Just astoundingly gross to call it the Wuhan Virus.”

Several times in January, however, NBC News stories referred to the “Wuhan coronavirus.”

The Washington Post ran an opinion piece Feb. 2 with the headline: “What the Iowa disaster and the Wuhan virus have in common.”