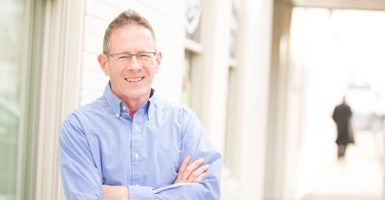 "Everything the union does is inherently political, and I could see that in the mailings I received," says art teacher Greg Hartnett, who sued the Pennsylvania State Education Association over fees imposed on nonunion employees. (Photo: The Fairness Center)

The Pennsylvania State Education Association continues to negotiate provisions to give it “fair share fees” in collective bargaining agreements, despite the fact that the highest court in the land ruled those fees unconstitutional, a lawyer who represents the art teacher told The Daily Signal in an interview.

“PSEA specifically has a history of thumbing its nose at Supreme Court precedent, and it has sometimes required litigation to make them comply with the court’s rulings,” Nathan McGrath, litigation director at the Fairness Center, said of the teachers union.

Hartnett and the others argue the teachers union shows “a willingness to challenge or ignore Supreme Court precedent,” and that the teachers should not be forced to pay the union’s fair share fees.

The case, Hartnett v. PSEA, is with the 3rd U.S. Circuit Court of Appeals, which is expected to rule in a few months. The Fairness Center teamed with the National Right to Work Foundation to represent the four complaining teachers.

The brief filed in August argues that the teachers union has a long history of undermining and violating Supreme Court rulings. It cites several examples that occurred after the high court’s June 2018 ruling in Janus v. AFSCME, which invalidated fair share fees, as being the latest in a series.

Related: A Year After the Supreme Court Rules Against Unions, What’s Changed

“PSEA specifically has a history of thumbing its nose at Supreme Court precedent, and it has sometimes required litigation to make them comply with the court’s rulings,” McGrath said of the teachers union, adding:

Because of that, the fact that the PSEA and its affiliates are still negotiating fair share fees provisions into collective bargaining agreements after Janus is not actually very shocking to us. This seems to be par for the course for how [the unions] operate, and it’s required federal court cases in the past, and in some cases a very lengthy period of time, to get them to comply with what the Supreme Court has said.

U.S. Department of Labor records show the Pennsylvania State Education Association has about 180,000 members, more than any other government union in the state.

The Daily Signal sought comment from the teachers union on the Hartnett case and on the allegations that the union has a history of violating Supreme Court rulings, including the Janus decision. At the time of publication, the union had not responded.

In the Janus ruling, the Supreme Court said state laws requiring nonunion government workers to pay fair share fees to a union violate the First Amendment rights of employees who do not support the political agenda of public employee unions.

In a press release, the Fairness Center estimates that in more than 70% of Pennsylvania’s 500 school districts, public school teachers who opted out of joining the union were required to pay fair share fees to cover collective bargaining costs.

Hartnett, who teaches art teacher in Homer-Center School District in Indiana County, Pennsylvania, and is the lead plaintiff in the case, previously was a member of the teachers union.

Hartnett, the father of five and an avid hunter, has taught since 1999.

He says that when it became apparent that the union’s political positions were in conflict with his own, he decided to go through the formal process of opting out of membership, which he described as “arduous and complicated.”

“I came to see that the union’s platforms and positions were very liberal and very different from mine and I did not want to contribute to someone else’s politics,” Hartnett said in an interview with The Daily Signal, adding:

The collective bargaining process itself is very political, and when they say political funds are separated from fair share fees, I don’t believe it. Everything the union does is inherently political, and I could see that in the mailings I received. I believe in the freedom of choice for each individual to represent themselves.

Teachers who prefer not to be in the union but need liability insurance and legal protection have alternatives, Hartnett said.

“There are free-market alternatives to the problem of the PSEA,” he said. “It is possible for teachers to go out and get a better product for less money, but I’m not sure many teachers are aware of these options.”

On the day of the Janus ruling, Rebecca Friedrichs, a former California public school teacher, made a prescient observation near the steps leading up to the Supreme Court.

Friedrichs told supporters that the high court’s decision to strike down mandatory union dues and fees was “just the beginning, not the end, of a very long fight.” Friedrichs told The Daily Signal.

In an interview, she said she “she ardently supports the Hartnett case,” which closely mirrors her own litigation.

Related: The Christian Educator Behind Teachers’ Fight for Free Speech at the Supreme Court

Friedrichs, who taught elementary school students for 28 years in the Savanna School District in Anaheim, California, was the lead plaintiff in a suit opposing mandatory union dues and fees.

Friedrichs’ case made it all the way to the Supreme Court, where oral arguments were held Jan. 11, 2016. With the death of Justice Antonin Scalia just a few weeks later, the court deadlocked in a 4-4 ruling that left California’s “agency shop” law in place until it was overturned in the Janus ruling.

But unlike Janus, the Friedrichs case explicitly asked the court to address the need for “paycheck protection” rules to prevent school districts from automatically deducting union dues from employees’ paychecks without their permission.

The former schoolteacher submitted an amicus brief in the Janus case, explaining why it was necessary for government employers and unions to obtain “affirmative consent” from employees before deducting dues or fees from their paychecks.

“We need paycheck protection, otherwise taxpayers will continue to pay for the collection of union dues,” Friedrichs told The Daily Signal, adding:

I submitted an amicus brief in the Janus case where I addressed the need for an opt-in rather than an opt-out arrangement where an employee needed to make a conscious decision to opt in to joining a union rather than going through the cumbersome process of opting out. This is not something Janus specifically asked for, but the court did deliver on this and said that employees must give their affirmative consent and consciously opt in to joining a union and paying union dues. But the other part of this is paycheck protection.

The Commonwealth Foundation, a free-market think tank based in Harrisburg, published a timeline of legislative efforts to implement paycheck protection, which would prohibit state and local government agencies (including school districts) from collecting union dues from the paychecks of government employees at taxpayers’ expense.

“Janus is the first domino and many others need to fall,” Friedrichs said. “Teachers unions are out of control. They’re not unions in the traditional sense and they are not representing teachers.”

The union label is misleading, she argues, because it is used as “a mask to advance a far-left agenda.”

Unions are the root cause of the failure in our schools. They are also still finding ways to collect fair share fees, but they just don’t call them that. The Hartnett case is very important to help ensure the law is being followed and free speech rights are being protected. God bless them.

Friedrichs is the founder of For Kids and Country, a grassroots group of parents, teachers, students, faith leaders, and citizens who support education reform.

Although his clients no longer pay fair share fees, McGrath said, he finds that teachers unions continue to make a concerted effort to undermine the Supreme Court’s Janus ruling.

“PSEA continues to work with their locals to negotiate fair share fee provisions into their collective bargaining arrangements that are being negotiated and signed after Janus,” the Fairness Center lawyer said. “It’s illegal language that’s being negotiated into these contracts. For the most part, PSEA controls negotiations for the locals on their behalf. They are largely dictating what goes into these collective bargaining agreements.”

While the Fairness Center continues to press its case, some Pennsylvania lawmakers have stepped up in an effort to reform the state’s labor laws.

Related: With Millions in Dues at Stake Across US, One Man Fights His Union for a Refund

State Rep. Kate Klunk, a York County Republican, introduced a measure (HB 785) that would require government employers to notify workers of their rights.

State Rep. Greg Rothman, a Cumberland County Republican, introduced a bill (HB 506) to allow government employees to resign from a union anytime they like, without a window to do so or any other restrictions.

“The aim of House Bill 785 is rather simple,” Klunk said in an email to The Daily Signal, adding:

It ensures workers who were once forced to pay into a public sector union know their rights, namely that they do not have to pay so-called fair share fees.

Though the U.S. Supreme Court handed down the ruling in the Janus v. AFSCME decision, not all workers know that they no longer have to pay these fees. My bill would make sure they are alerted to the change. My bill would also alert those who apply for public sector jobs that being a member of the union is not a condition of employment, and that as a nonmember they have no obligation to make any payments.