Without These Protections, States Will Tax Small Businesses to Death 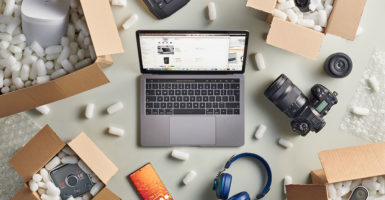 The Supreme Court ruled almost two years ago that all 50 states and tens of thousands of local tax jurisdictions are permitted to reach outside their borders and require out-of-state internet retailers to collect and remit local sales taxes. (Photo: Neil Godwin/Future Publishing/Getty Images)

Small and midsize online stores are being put out of business one tax bill at a time.

The Supreme Court ruled almost two years ago that all 50 states and tens of thousands of local tax jurisdictions are permitted to reach outside their borders and require out-of-state internet retailers to collect and remit local sales taxes.

Steve Jenson, a Utah bookseller, told Bloomberg Tax he recently got hit with a $200,000 bill from Washington state for taxes he was not previously required to collect. States across the country are sending bills for 10 years of back taxes.

One more bill, and “it’s game over,” Jenson said.

Simply complying with these new state sales tax liabilities on future transactions is costly. At a recent congressional hearing, Brad Scott, a jewelry wholesaler in Arizona, said he spent $2.31 for every dollar in sales taxes his family business collected.

Congress can fix this problem by protecting all businesses that aren’t physically present in a state from that state’s revenue collectors.

Big businesses such as Amazon and Walmart already pay taxes in every state because they have stores and distribution centers all across the country. A physical presence requirement is the most straightforward and commonsense small business protection Congress could adopt.

In a 2018 decision, the Supreme Court ruled against the Boston-based online home goods retailer Wayfair. The case of South Dakota v. Wayfair Inc. challenged a South Dakota law that requires out-of-state businesses to collect the state’s sales taxes on goods sold to customers in the state, even though Wayfair had no physical connection—or political recourse—in South Dakota.

Cases such as Wayfair’s are an exception. In 2018, 17 of the largest 18 online retailers already collected sales taxes on all online sales. The problem is that small, family-owned businesses now are being caught in the crossfire.

More than 25 years ago, in Quill Corp. v. North Dakota, the Supreme Court threw out exactly this sort of tax scheme. The high court ruled that a state cannot require a business to collect sales taxes for it unless the business has a physical presence—such as a store, warehouse, or employees—in that state.

This fundamental principle of “physical presence” limits the reach of revenue-hungry tax collectors in all 50 states. It kept South Dakota, Washington, or California from forcing local businesses in Arizona or Utah to collect their taxes for them.

Small businesses now operate in a world without the protection of the physical presence standard. Every small business that sells online now can be subject to the more than 10,000 different taxing jurisdictions around the country—each with its own rates and rules about what is taxable.

Some states are sending out collection notices for “uncollected” taxes from years before the 2018 ruling that overturned previous protections. Small business owners are on the hook for potentially crippling retroactive tax bills.

The Constitution gives Congress the authority to fix the problem. For two years now, lawmakers have failed to act.

Under its power to regulate interstate commerce, Congress should codify the physical presence standard to protect small businesses and limit the reach of extraterritorial taxes. Congress also should ban retroactive tax collections.

The new status quo under Wayfair is untenable. The court created a Wild West for state sales taxes, and small businesses are the victims.

Some say Washington should mandate the simplification of state sales taxes. But any solution that does not include a physical presence protection would expand the reach of state tax collectors and likely do little to simplify taxpaying.

Proposals that force sellers to track their sales to the consumer’s destination and comply with laws in other jurisdictions are fundamentally at odds with the principles of local government and American federalism.

The Supreme Court got it right 25 years ago, and it was wrong to second-guess that decision. Congress now must step in.

There’s still no good reason to expand the reach of state taxes beyond their borders. This may seem to level the retail tax playing field, but instead it has created new burdens on America’s most vulnerable businesses and undermined government accountability.